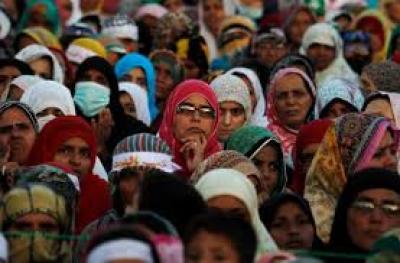 The Pakistani government has slapped a case against two opposition leaders at the centre of the anti-government protests that has seen the state television headquarters in the capital stormed earlier in the day.
Police station secretariat in Islamabad has registered a case under an anti-terrorism act against politician Imran Khan, religious leader Tahir-ul-Qadri and hundreds of their supporters for organising riots, damaging state buildings and attacking security forces.
Anti-government protesters briefly occupied the building of state television, PTV, and cut transmissions of the broadcaster’s news services in Urdu and English for 45 minutes. Transmission was resumed after paramilitary soldiers arrived at the building and cleared it.
Amid the political chaos, the country’s powerful army chief Raheel Sharif met the beleaguered Prime Minister Nawaz Sharif. No statement was issued after their meeting in the capital.
But on Sunday the army had said that further use of force to resolve the escalating political crisis would only worsen the situation.
The opposition leaders have been calling for the resignation of Sharif over allegations of corruption and vote rigging in the last year’s general elections won by Sharif?s party.
Protesters have been trying to reach government buildings for the last three days, and have been staging sit-in for the past three weeks.
The case against Khan – a former cricketer – and Qadri – a Canada-based religious leader – has been opened in the framework of First Information Report (FIR).
Meanwhile, Khan demanded the Islamabad police chief to immediately release all the arrested supporters of his party Tehreek-e-Insaf as well as supporters of Pakistan Awami Tehrik, the political movement of Qadri.
The cricketer-turned politician also said that they were going to lodge a FIR against the government for murdering peaceful protesters. Earlier, condemned the storming of the state television building.