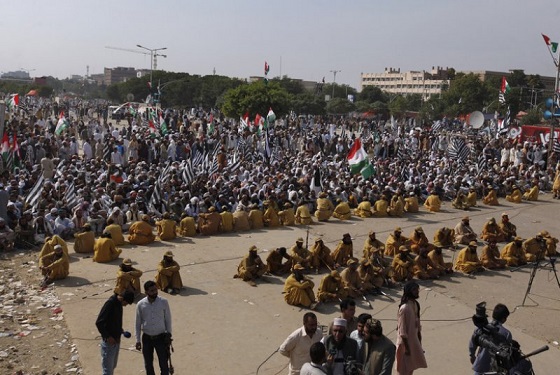 Thousands of protesters staged a sit-in after battling with riot police in the northern Pakistani city of Rawalpindi on Sunday, demanding the government expel the French ambassador from the country.

Anti-France protests have erupted in some parts of the Muslim world after French President Emmanuel Macron defended the right to publish cartoons, including those deemed offensive, in late October.

Thousands had gathered at Rawalpindi’s historic Liaqat Bagh park under the banner of the far-right party Tehreek-e-Labbaik Pakistan (TLP) before marching to the entry point of the capital Islamabad, the Faizabad interchange.

A TLP spokesperson said they would continue protesting until the French ambassador was expelled from the country. In addition, they demanded the release of all workers arrested by police during and before the protest rally.
Riot police used tear gas and to disperse the angry protesters several times but did not succeed.

The capital had been under virtual siege since early morning after authorities blocked roads and suspended cellular service in the twin cities.

Police blocked roads to the city’s diplomatic enclave with shipping containers, while security forces were deployed to the French embassy.

At the rally, protesters shouted slogans calling for vengeance and for a boycott of French goods, following another march held in the city of Karachi last Sunday.

In 2017, the TLP blocked the Faizabad interchange for more than a week and called off their sit-in after a minister they accused of blasphemy stepped down.

The French president’s comments on depictions of Mohammed came after a school teacher was killed by an Islamist for showing caricatures of the holy figure, originally published in the satirical magazine Charlie Hebdo, during a lesson on freedom of expression last month.

Any depiction of Mohammed is forbidden in Islam and is deemed offensive by Muslims.

Pakistan, a 220-million strong country with an overwhelmingly Muslim population, experienced deadly protests when a movie deemed insulting to the prophet was uploaded on YouTube in 2012.