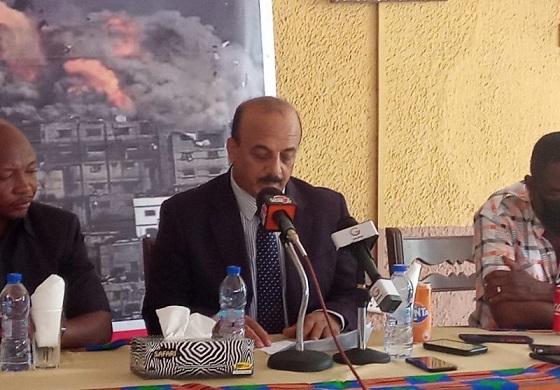 Mr Abdulfattah Ahmed Khali Alsattari, Ambassador of the State of Palestine to Ghana, had reiterated the need for peace in Palestine and the Middle East.

He noted that there would be no peace in the Middle East unless the Israeli-Palestinian conflict was addressed.

Mr Alsattari said this at a press conference in Accra on the theme “The Israeli Crimes Against the Palestinians Must Stop”.

The press conference was organized by the Palestinian Embassy in Accra to inform the public on the humanitarian situation and developments concerning the ongoing war between Israel and Hamas in Gaza.

In attendance to solidarize with the cause of the Palestinians were Mr Kwesis Pratt Jnr, Convener of the Socialist Forum of Ghana and Mr Ras Mubarak, former Member of Parliament (MP) for Kumbungu.

Mr Alsattari said in the last 14 days that Israel started to attack Gaza with tanks, big bombs and with war planes, the Israeli forces had killed 220 Palestinians; of which 63 were children, 36 women and16 aged people (old men and women).

He noted that 15 families were killed (from father to children) and that over 1,600 were injured in the ongoing conflict.

He said the Palestinians were not in a position to tell how many houses had been destroyed as at now, because most of the people in Gaza had left their houses and were now living on streets or in United Nations (UN) Schools inside Gaza; adding that 40,000 Palestinians were now sleeping in the UN Schools.

“About the people injured, I want everyone to know, anyone losing his hand, or his eyes, or his legs, will (be) suffering for the rest of his life. And any family that Israel destroys their housing, they need a lot of years to build a new house,” he said.

He noted that Palestinians living in Gaza could no longer sleep because of the noise form Israeli bombs dropping on their cities.

With regards to the cause of the outbreak of the ongoing conflict between Israel and Hamas, Mr Alsattari mentioned that the Palestinian Government had planned to organize an election on May 22, and that Palestinians living in Arab East Jerusalem were supposed to part-take in it, but the Israeli Government was opposed to it.

He also cited Israelis’ grabbing of Palestinians’ lands for themselves as one of the causes.

The Ambassador commended the Government of Ghana for its unwavering support for the Palestinian people.

Mr Mubarak maintained that the happenings in Palestine was about human rights.

“If you have a situation where people were being evicted from their homes, where their land is being encroached upon, clearly that cannot be right. What is happening in Palestine is nothing but apartheid, which can be compared to what happened in South Africa.”

On his part, Mr Pratt Jnr said, what was happening in Palestine was a violation of international laws by Israel.

He described what was happening in Palestine as a political detention of the Palestinians without charges or trial.

He noted that both Ghana and the African Union (AU) solidarize with the people of Palestine in their cause for just society and self-determination.

Mr Pratt reiterated that various Governments of Ghana, since the days of Dr Kwame Nkrumah to date, had always supported the Palestinian people.