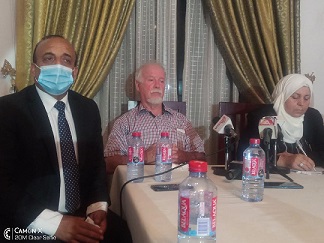 A Palestinian delegation to Ghana has urged the country to reject Israel’s bid for an Observer Status on the African Union (AU).

He said granting Observer Status to Israel by the AU would contradict the continental body’s support for the Palestinian cause and its principles.

Dr Uri Davis, the Deputy Commissioner-General for Political Affairs of the Palestine National Liberation Movement “Fatch” International Relations Commission, said this at a press conference in Accra on Tuesday.

Dr Davis is leading a two-member Palestinian Delegation on a tour of five selected African countries, including Ghana, to rally support against Israel’s bid for the AU Observer Status.

The delegation is billed to visit Ethiopia, Nigeria, Senegal and The Gambia after engaging Ghana.

The other member of the Palestinian delegation is Madam Kifah Harb, a Member of Fatah Revolutionary Council.

The African Union Commission, in July this year, granted Observer Status to the State of Israel.

However, the Status is yet to be put up for discussion and approval at the AU’s Council of Foreign Ministers meeting in October.

A two-third majority vote of the 55 AU Member States is required to grant the Status.

Dr Davis, at the press conference, appealed to African nations to stand in solidarity with the people of Palestine in their liberation struggle.

Madam Harb recounted the role Palestinian women were playing in their struggle for self-determination from Israeli occupation.

“All the Palestinian people support a peaceful resolution to this conflict,” he said.

He lauded the Government of Ghana for supporting the concept of the two states solution to resolve the conflict.