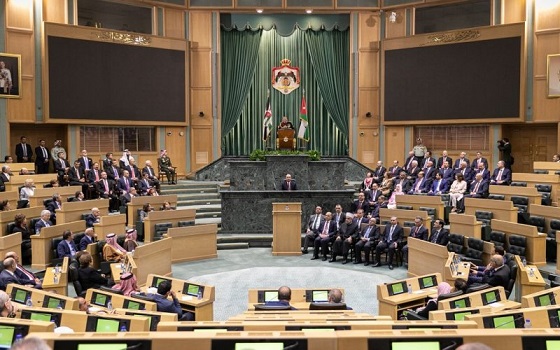 Political banners in the streets are one of the only visible signs that there is an election taking place in Jordan this month.

Most campaign activities have moved online as the country struggles with a rising number of new coronavirus infections.

More than 1,690 candidates are competing for 130 parliamentary seats in the November 10 polls, which observers believe will see low turnout due to the pandemic as well as public apathy towards the electoral process.

And yet, colourful placards in the streets of the Jordanian capital feature the candidates’ names, faces, electoral lists, and in some cases their political slogans.

A limit of 20 people at public and private gatherings means the candidates cannot hold the massive rallies that were once a defining feature of elections in the Middle Eastern country.

In July, the Independent Election Commission said candidates must abide by social distancing rules when they receive people at their offices.

“Candidates cannot provide food like they are used to – no mansaf, no knafeh,” commission spokesman Jihad al-Momani, said referring to a traditional meal of stewed lamb – usually served on large plates for sharing – and a traditional dessert of shredded filo pastry.

Due to violations of these rules, a number of candidates in at least four provinces “were summoned for questioning,” police said.

Jordan’s daily infection numbers have been on the rise since August, reaching almost 4,000 one day last week – many times higher than the figures recorded earlier this year, when a strict lockdown helped to contain the virus’ spread.

The government on Sunday issued an all-out ban on candidates receiving people at their offices for the final week of campaigning, ending any chance of personal interaction with voters.

Hours after results are announced on November 11, a total lockdown will be imposed nationwide for a period of four days to prevent celebrations and large gatherings.

Over the last few weeks, candidates depended heavily on social media to address voters, publishing videos about their programmes and taking part in online debates.

“We are … used to addressing large groups of people, which is important so we can express our stance. We have lost a major communication channel,” said Abla Abu Elbeh, secretary general of the People’s Democratic Party, which is contesting the polls as part of an alliance of leftist parties.

The lack of direct interaction between candidates and voters may add to political apathy that has been fuelled by criticism of an electoral law passed in 2016.

It introduced an open-list proportional system, meaning that voters will vote for a party list, as well as choosing individual candidates within this list. No candidate can run individually.

Whether driven by the fear of coronavirus or frustration with the electoral process, Abu Elbeh expects a turnout of no more than half of the 35 per cent recorded in the 2016 elections.

Some people expressed anger online that the government is going ahead with elections while coronavirus-related restrictions are becoming more stringent.

“Insisting on holding parliamentary elections in light of this epidemic … is a disregard for the health and safety of citizens,” one person wrote on Twitter.

Political economist Laith al-Ajlouni said the next parliament could be “weaker than the previous one” and even more aligned with the government.

The next parliament is expected to face public anger over two major issues. The US-brokered normalization deals between Israel and the United Arab Emirates and Bahrain are expected to change the political and economic dynamics in the Middle East, and many expect this to affect Jordan, which hosts 2.3 million Palestinian refugees.

The second issue is the economic repercussion of coronavirus, led by a soaring unemployment rate that stood at 23 per cent in the second quarter of 2020.

Parliament will also have to deal with next year’s budget and could be asked to revisit the electoral law, al-Ajlouni said.