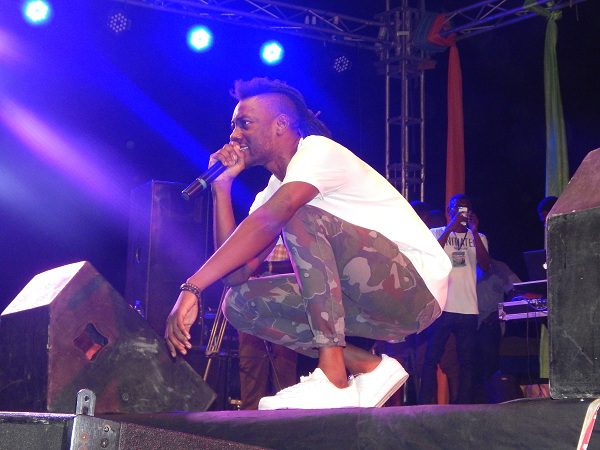 Management of Ghanaian hiplife/hiphop artiste, Pappy Kojo says the artiste cannot be blamed for a controversial picture that captures him and two male fans, one of whom exposed his genitals.

Management member Paa Debrah, said the rapper did not take that picture deliberately but was forced by the fans to take the picture with them, against his will.

The explanation follows a backlash from a section of Ghanaians who criticised Pappy Kojo, born Jason Gaisie, for taking a picture with a fan who had his panties dropped to his knee level exposing his genitals.

Speaking to Amanda Jisseh on ‘U Say Watin’, a segment on Showbiz Fila, on Hitz 103. 9FM, Paa Debrah said that Pappy Kojo grudgingly did what he did because of the respect he has for his fans.

“If you look at the picture you will realise that they were holding his hands so Pappy Kojo did not even pose for the picture,” he explained.

He however apologised to Ghanaians for that unfortunate incident.

Paa Debrah also rubbished claims by some of Pappy Kojo’s critics that he intentionally took the picture to create controversy in order to promote his catchphrase, ‘Yi Wo Dros’ meaning ‘Remove your pants’.

An entertainment pundit, Price Tsegah believes that the explanation given by Pappy Kojo’s management is illogical and should not be accepted.

“Is Paa Debrah trying to tell us that Pappy Kojo will be willing to smoke marijuana knowing that he could be arrested for that if his fans tell him to so?” he asked doubtfully.

He has also called for the resignation of ‘Realer No’ hit maker’s management for what he describes as failing to manage the controversy surrounding the pictures.