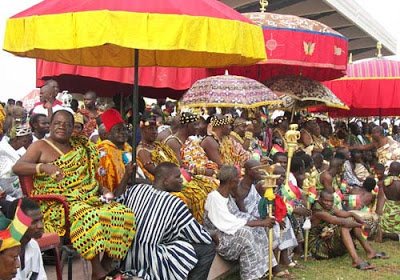 Okofo Katakyi Nyakoh Eku X, the Paramount Chief of Nyakrom Traditional Area, has called on the chieftaincy institutions to select the rightful persons to the stool through the proper lineage to prevent conflicts.
“To foster unity in our communities, l would like to appeal to various kingmakers to be extra disciplined in choosing rightful persons to occupy royal stools when they become vacant,” the Omanhene said.

The truth of the matter is that most of the time some kingmakers failed to trace proper lineage of kingship, adding that they ought to seek all the royal gates and to select accordingly the rightful persons for the stool to promote peace.

The Omanhene said there were so many chieftaincy disputes lingering in various traditional councils and law courts due to parochial interest on the part of some kingmakers and heads of clan.
Okofo Eku said it was sad to note that chieftaincy institutions had been plunged into various forms of deadly conflicts resulting to threat to human lives and killings in many circumstances.

He said it was imperative for kingmakers to ensure accurate rotation of occupation of royal gate stools to enhance fairness, co-existence, stability and development in various communities and the nation as a whole.

The Omanhene lauded the Twidan Family in Agona Nyakrom for the vital role it had played in the development of the Traditional Council and Nyakrom Town.
He said the intention to elevate Obrempong Appoh III stemmed from the positive contributions his late uncle, Nana Kasapreko Appoh II, made to the development of Nyakrom Traditional Area.

Obrempong Appoh expressed appreciation to the Omanhene of Nyakrom Traditional Area for the honour done him and the entire Twidan Family and assured him that he would do all in his power to ensure peace and development.
He said as Benkumhene of Agona Nyakrom he would collaborate with stakeholders in education to enact bye-laws which would ban school children from staying outside after 2000hours to enhance quality education.

Obrempong Appoh urged parents and guardians to take good care of the children and invest in their education to assist them to become responsible adults.
The Benkumhene said leavers’ night jams organised for junior and senior school graduates would not be tolerated since it bred child delinquency and in some cases teenage pregnancy.
GNA