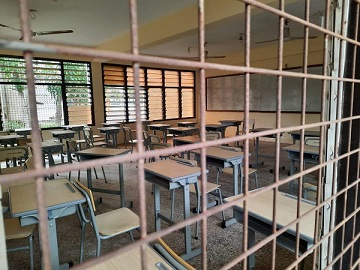 Togbe Tepre Hodo IV, President of the Volta Region House of Chiefs, has condemned the wanton destruction of the environment for monetary gain.

He said the quest to profit from the exploitation of the natural environment had resulted in visible signs of deforestation and placed mankind on the path to self-destruction.

Togbe Tepre Hodo raised the concerns when he joined stakeholders at the Regional Launch of the Green Ghana Project, a nationwide tree-planting campaign.

“The environment is in deep crisis and if we don’t do something about it, the saying that when the last tree dies, the last man will die will come to pass.

“We are hacking the environment to pieces just to fill a few pockets,” he lamented.

Togbe Tepre Hodo, also Paramount Chief of Anfoega Traditional Area, said individuals must shoulder the environmental responsibilities and not deposit all blame at the doorstep of the government.

“The last resort is to blame the government. We must start with ourselves. Let’s ask ourselves what we are doing to curb the rampant destruction of the environment,” he said.

“I hope that it will not be the end but the beginning of something to save the environment”, he said.

The Green Ghana Project is an initiative of President Nana Addo Dankwa Akufo-Addo and geared towards environmental restoration and climate preservation.

About five million trees were targeted for planting nationwide on the day of the launch in an exercise, which would be sustained by the Forestry Commission.

The project has won the support of various state and non-state institutions and organizations as well as traditional leaderships across the country.

Dr Archibald Yao Letsa, Volta Regional Minister, who launched the exercise praised the support of Chiefs from the Region, saying it testified to the “sure commitment” of the custodians of the land.