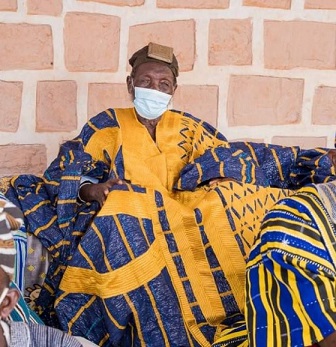 The Nayiri, Paramount Chief of the Mamprugu Traditional Area, Naa Bohagu Mahami Abdulai Sheriga, has lauded President Nana Addo Dankwa Akufo-Addo for the development projects and the implementation of pro-poor policies across the country.

He said the people of the North East Region acknowledged his achievements in the first tenure of his government through the pro-poor policies introduced.

The Chief, through his spokesperson, noted that the policies included the Free Senior High School, the Planting for Food and Jobs, the One District, One Factory, One Constituency, One Ambulance, the expansion of the school feeding programme and the introduction of the Nation Builders Corp, among others.

The Paramount Chief applauded the President when he called on him at his Palace at Nalerigu, the North East Regional capital as part of his two-day tour of the Region.

He said, “These policies made life meaningful to the poor and the North East as a young Region for which the policies perfectly fit. Indeed the impact of your government has been felt by the whole country, especially the people of the North East Region.”

The Paramount Chief said the policies and development were evident in the construction of the town water projects across the North East Region, which was commissioned by President Akufo-Addo himself.

He mentioned the asphalt layout on the Nalerigu, Gambaga and Walewale town roads and several ongoing road constructions work in the Region, including the Nalerigu Bunkrungu road, and the Gbintiri-Chereponi Road among others.
“Mr President, the projects witnessed have been on the request list of Mamprugu for years, which eluded and undoubtedly passed from government to government. Certainly, we owe you tonnes of gratitude,” he said.
The Nayiri appealed to the President to construct a befitting Traditional Council Office for the Mamprugu Traditional Area.

He said the current structure was constructed in the colonial era and had never been renovated.

“The building is now in a deplorable state and does not befit the current status of the Mamprugu Kingdom.”
Naa Sheriga said the Vice President, Alhaji Dr Mahamudu Bawumia cut the sod for work to begin on the construction of the North East Regional House of Chiefs complex last year and appealed to the President to intervene in the speedy construction of the complex.

The Paramount Chief said the Region was delighted when a team from the National Youth Authority requested a site for the construction of a Regional Sports Stadium.

“Eight months down the line, the Contractor is yet to take possession of the land. Once again, we are appealing for your intervention.”

President Akufo-Addo, in his address, noted that his two-day visit to the Region was to thank the chiefs and people for the support he received during the 2020 Presidential and Parliamentary elections.

He said four Parliamentary seats out of the total of six seats were occupied by the New Patriotic Party (NPP) and noted that the NNP’s Presidential Candidate won an absolute majority in the North East Region for the first time in the Fourth Republic.

“I want to put on record my appreciation for your words of commendation about the work of our government and the various matters that you have seen as being policies that are improving the lives of our people.

“The requests that you have made from me, the Traditional Council and North East Regional House of Chiefs, are requests that are of course going to be acted upon,” President Akufo-Addo said.