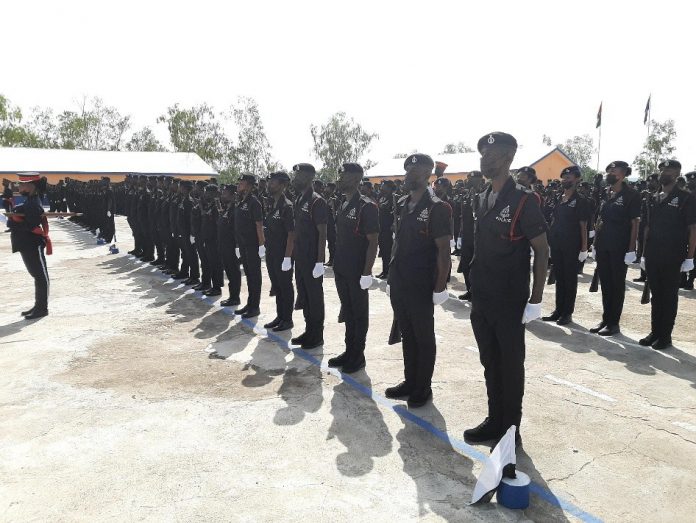 The Director-General of Welfare of the Ghana Police Service, Commissioner of Police (COP) Mrs Maame Yaa Tiwaa Addo-Danquah, has called on families of newly recruited Police Officers to limit their expectations and financial demands on them.

She said the Recruits should be allowed to concentrate on their work, and support their families with financial and material resources in line with their earnings.

She said undue demands might compel them to engage in unprofessional activities, which may trigger unpleasant consequences.

“They have taken national and organisational oaths to serve mother Ghana,” she added.

COP Mrs Addo-Danquah was speaking at the passing-out parade of 581 newly recruited Police Officers at the Police Public Safety Training School at Pwalugu in the Talensi District of the Upper East Region.

She said continuous guidance and advice to the Recruits would help them to succeed and reminded them that the profession demanded a lot of sacrifices.

“It is not a smooth terrain and you will soon appreciate this observation when you get posted to various Police Regions, Divisions, Districts and stations to commence your post-depot practical attachments,” the COP told the Recruits.

She told the recruits that they had chosen a career, which called for selfless service to humanity, commitment and sacrifices and indicated that it was not a sanctuary for them to make unjustified wealth.

“Therefore, desist from corrupt practices, which tend to bring the image of the Service into disrepute. Never forget the motto of the Service ‘Service with Integrity.

“Avoid bad association and put on the cloth of patriotism, humanity, courtesy, honesty, civility and commitment to the career you have chosen. You will excel in every endeavour of your career when you consistently observe these professional virtues,” she advised.

She entreated them to bring the knowledge acquired over their period of training to bear on their work after which they would be assessed by their various Commanders to ascertain their suitability for the job.

She cautioned that any unsatisfactory performance would attract the needed sanction under the regulations of the Service.
“I, therefore, urge you to work diligently to guarantee your confirmation into the Service as Police Constables.”

The COP congratulated the Recruits, especially General Recruit (G/R) Wonder Segbedzi of the Regional Police Training School in Ho for emerging as the overall national best recruit, G/R Ebenezer Nkrumah for being the best recruit in the Pwalugu Police Training School and Recruit Hannah Arthur for her outstanding performance as the best female recruit.

This, he noted, could only be realised in a peaceful atmosphere. “All of you will be responsible for upholding the law and protection of all our citizens, residents and visitors. We all want to sleep and wake up peacefully which is only possible if we take up those roles seriously.”