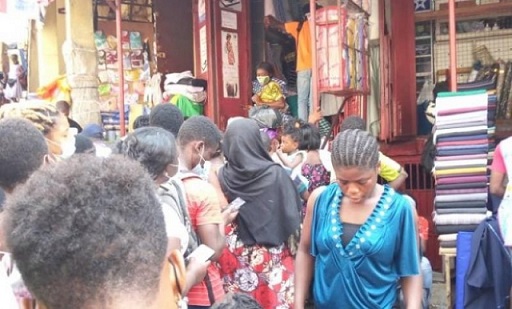 Some parents have queued to purchase school fabrics for their wards two days to school reopening at shops in Makola.

President Akufo-Addo in his 21st update on measures taken to combat COVID-19 directed both public and private schools to start a new academic year amid the COVID-19.

The Ghana News Agency team, therefore, visited some fabric shops in the Central Business District in Accra on Saturday, to ascertain if parents were still purchasing school fabrics for their wards in the Basic and Junior high Schools.

It spotted long queues formed by parents and guardians in shops including the Abena Wahab fabric shop, Yesu Nti Enterprise and others to purchase fabrics to sew school uniforms for their wards.

Madam Joyce Quayson, a public servant and a mother of basic six students in the queue, told the GNA that she had been in the queue for some time and was waiting for her turn to get served.

She said the fabrics at Abena Wahab shop was quality and affordable by all standards hence the reason for her choosing that particular shop.

Mrs Ophelia Osei, a parent of two basic school children said she mostly purchased fabrics to sow for her wards each academic year, explaining that the shops were often busy with long queues due the quality of the fabrics sold there.

“I came on Monday to purchase the fabric but the price was increased and the money on me was not enough so I went back home”, she said.

Madam Olivia Ampah, a trader and parent who had purchased hers said even though the prices had increased, the quality which remained the same which encouraged her to still purchase from the shop.

She said her wards had old uniforms which they can wore for the week before the new ones would be sown.
At Yesu Nti enterprise, Madam Alberta Serwaa, a fabric seller said the demand for school fabrics has been on the increase since the government gave directives for schools to reopen.

“The prices are no longer the same as it used to be but parents are still patronising and I think because the children have been in the house for long, parents are eager to get them back to school,” she said.
She added that the import duties and closure of borders had caused the increase in the cost of the school fabric prices.

Mr Abdulai Fuseni, a 43 year old who also trades in fabrics said many parents complained about the high cost of the fabrics, however, they still bought them as they did not have much options.

He said, he had different types of school fabrics including printex, dabadin, dacron and suiting materials, checked materials in stock to serve his customers in the queue.

The team observed that the COVID-19 protocols were not being followed, most of the parents in the queues were not in their nose masks and there were no veronica buckets placed at the shops.

Jehovah Witnesses put parents, young ones on alert against bullying