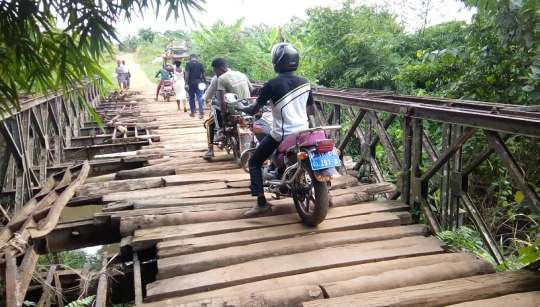 Parents are withdrawing their children from the Abisim-Yeboah Junior High School in the Suhum Municipality of the Eastern Region due to the dilapidated bridge linking the community to the school, posing great danger to the pupils.

Residents of Abisim-Yeboah Community, who spoke to the Ghana News Agency (GNA), said the bridge was the only link to the School and nearby communities including Abisim-Dawa, Nankesse, and Akwadum.

They said on many occasions, some school children crossing the bridge slipped and fell into the Densu River, adding that its bad nature was also affecting the economic and social lives of the people.

Mr Solomon Ofori Yeboah, an elder of the Community, said for many years he had organised communal labour to repair the bridge but its current state needed a total overhaul by the authorities.

Mr Bright Ernest Nyakotey, a resident, said the commercial motorcycles now charged double the fare because of the deplorable nature of the bridge, which was having a toll on the finances of residents.

He, therefore, appealed to the Suhum Municipal Assembly and the Member of Parliament, Mr Frederick Opare Ansah, to go to the aid of the community.