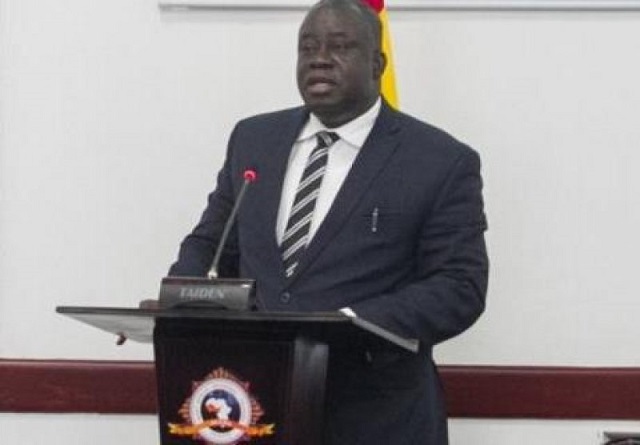 Ghana’s Immediate past National Security Coordinator Joshua Kyeremeh, who died on Monday, 18th January, 2021, has been praised for his role in promoting financial accountability in gold export and revenue generation for the state.

“Right Honourable Speaker, Mr. Kyeremeh was not only a colossus in the area of security but was also an ardent promoter of financial accountability, particularly in the sphere of gold export and revenue generation for the state,” Mr Paul Apraku Twum-Barima, MP for Dormaa East, said in a tribute on the floor of Parliament, at Osu, in Accra.

The tribute was read in less than 48 hours after the demise of the security capo, whose last breathed at the Ga East Municipal Hospital, and whose death was suspected to be Covid-19 related.

The eulogy harped his “his leadership and cooperation with the Bank of Ghana, plugging several loopholes in the export of gold were blocked.

Mr Twum Barima said: “Right Honourable Speaker, barely 48 hours ago, myself, as well as many of my colleagues in this House heard sad news of the passing of one of our nation’s finest personalities in the sphere of state security and intelligence who contributed immensely to Ghana’s commendable maintenance of protocol, and I believe that I do not speak only for myself when I say that we are deeply saddened that Mr Joshua Kyeremeh has departed at a time like this.”

The maker of the statement described his death as sombre, but observed that it was compelling of recognition by the house due to the late Kyereme’s numerous contributions to the effective management of national security.

Described as a “True Son of the Soil, “ the late National Security Coordinator was also remembered for fond interactions the MP said the legislators had with him.

“Right Honourable Speaker, as an administrator, a politician and a security expert par excellence, Mr. Kyeremeh was dedicated and committed to the security of Ghana and focussed his efforts towards ensuring that Ghanaians and indeed all persons among the civil society enjoyed security as a basic provision within the state.

“Devotion, he exhibited in some cases at the peril of his own life, Mr. Kyeremeh’s commitment and dedication to the security of the state was exhibited all through his career trajectory.

The late Kyeremeh, an alumnus of the Kwame Nkrumah University of Science and Technology was noted as serving for over 22 years in the security intelligence space, during which he served among others as Command Officer under the Bureau of National Investigations (BNI), now known as National Intelligence Bureau (NIB) in the Northern, Upper East, Ashanti and Greater Accra Regions.

He rose to become the Deputy Director of BNI before ultimately, assuming the role of Director of the BNI from 2005 to 2009, and touted for his professionalism and great commitment to duty.

He was appointed National Security Coordinator by President Nana Addo Dankwa Akufo Addo in 2017, the position he held until his recent demise.

Mr Twum-Barima eulogised the late Kyeremeh for his contribution to national development, particularly in the sphere of security architecture, which he said was unparalleled and unprecedented in the history of Ghana.

“Mr. Kyeremeh was extremely passionate about both the internal and external security of Ghana. With regards to external security, he played a pivotal role in the formation of the Security Governance Initiative (SGI), an organisation which he co-chaired with the US Ambassador to Ghana, Ambassador Stephanie S. Sullivan.”

The maker of the statement said upon his assumption of office as a National Security Coordinator, the late Kyeremeh demonstrated greater commitment in maritime security, border security, and cyber security.

“He therefore viewed security in these areas as an emerging threat to Ghana’s peace and stability,” the statement said, and noted that he contributed a great deal in the fight against Covid-19 in Ghana with some of the most noticeable activities carried out during the lockdown periods.

With such discipline security coordination, it was no surprise Ghana was ranked 7th in the fight against Covid-19 under his watch.

He was also a key member of the Election Security Task Force which ensured peaceful election in the 2020 general elections.

Speaker Alban Bagbin, who granted a request for a minute’s silence in memory of the deceased, emphasised that “Covid-19 is real and deadly.”

He urged the legislators to lead by example; and extended the condolence of the House to the immediate family of the deceased and Ghanaians for the “painful loss.”

Mr Dominic Nitiwul, immediate past Minister of Defence, said peers of the late Kyeremeh in Ghana, West Africa and the world over recognised him for his par excellence professionalism.

Minority Chief Whip Muntaka Mubarak and MP for Asawase described late Kyeremeh as a “fallen hero” adding that his service as national security coordinator at different periods clearly showed how much he contributed to the maintenance of national security.

Other contributors stressed on the need for adherence to Covid-19 safety measures.