Parliament is likely to extend sitting beyond Saturday, December 21, when it planned to go on recess, to Christmas Day, in order to complete programmed business.

Prominent among the business to be conducted is the vetting of the new Chief Justice Designate, Mr Justice Anin Yeboah, who if confirmed by the House, would take over from outgoing Chief Justice Sophia Abena Boafoa Akuffo.

Chief Justice Akuffo would retire on December 20, 2019, her 70th birthday.

Following the reading of the Business Statement by Mr Kwasi Ameyaw- Cheremeh, the Majority Chief Whip, Mr Samuel Okudzeto Ablakwa, Member of for North Tongu and Appointments Committee member, raised issues about a looming vacuum if the position of the Chief Justice was not filled immediately after her retirement.

That, he said, was despite the fact that there was somebody to act, but there were challenges including health issues.

The House learned that memoranda on the President’s nominee for the position has been scheduled to close by the 20th December, and that would mean the House would have to add a few more days before adjourning or would have to adjourn and go back by January 8 or 9, next year.

It was during the discussions that the Speaker, Prof Aaron Michael Oquaye, intervened with the reminder that the House would have to work even if it meant working on the 24th night or even on December 25, Christmas Day.

Mr Joseph Osei-Owusu, the Chairman of the Appointment Committee, informed the House that it had scheduled the vetting of the Chief Justice Designate for December 21, 2019.

Other concerns that attracted the attention of the House were the border issues that were affecting Ghana and her eastern neighbours, for which the Speaker directed that the Foreign Affairs Minister briefed the House before it rises.

Mr Sam Nartey George, MP for Ningo Prampram, called on the House to invite the ministers concerned to brief the House on the security arrangements on the influx of people into Ghana.

He said there had been more than 700,000 applications on the occasion of the celebration of the Year of Return. 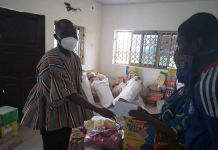