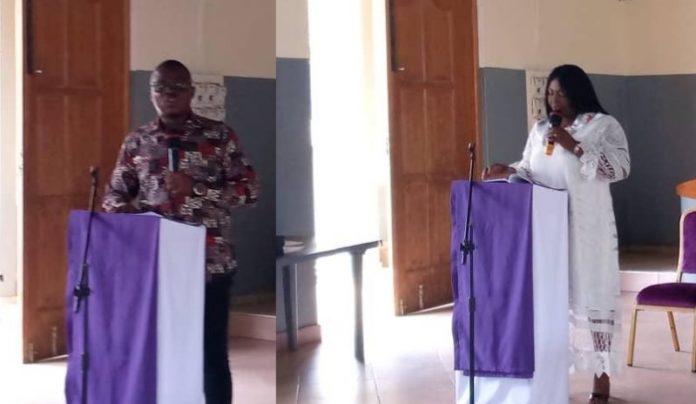 Two Parliamentary candidates in the Anyaa Sowutuom Constituency have promised to provide improved road networks when voted into office.


They are Mr Emmanuel Adotey Allotey, the Parliamentary Candidate (PC) for the National Democratic Congress, and Madam Joyce Larbie, the PC for the Convention People’s Party.

They made these promises at a Town Hall meeting when they took their turns to present their policies and programmes to the constituents, ahead of the December polls.

The meeting, organised by the Justice and Peace Commission of the Catholic Archdiocese of Accra, brought together opinion leaders and electorates to share their views on issues of concern in the constituency.

Mr Allotey said he would provide basic social amenities including water, improved road networks, and drainage systems to help solve the perennial flooding in the area.

“As a member of parliament, you have the primary role to market the challenges of your constituents and lobby for projects to be done,” he said.

Mr Allotey, who is a banker, said he would establish an MP’s Credit Union for traders, especially market women, to help improve their businesses.

He said he would group the 13 electoral areas of the Constituency into three and establish an MP’s office in each of them, where constituents could lodge complaints and challenges.

Madam Larbie said if given the nod, she would implement a community skills training for the youth.

The apprenticeship training programme would provide the youth, especially those unable to further their education, with alternative skills in sowing and catering among other things.

Madam Larbie said she would introduce a constituency credit union to support the people, especially the aged.

She promised to lobby for road projects, drainage systems and provide water connectivity if she became the Member of Parliament.

Mr Ogochukwu Nweke, Vice President of Synergies Institute-Ghana, who was a guest speaker, entreated the electorates to be well informed on the duties and roles of parliamentarians so as to hold them accountable.

He said a lot of people were not privy to designated roles of MPs and the Central Government, thereby making some politicians to take advantage and make promises outside their designated roles.