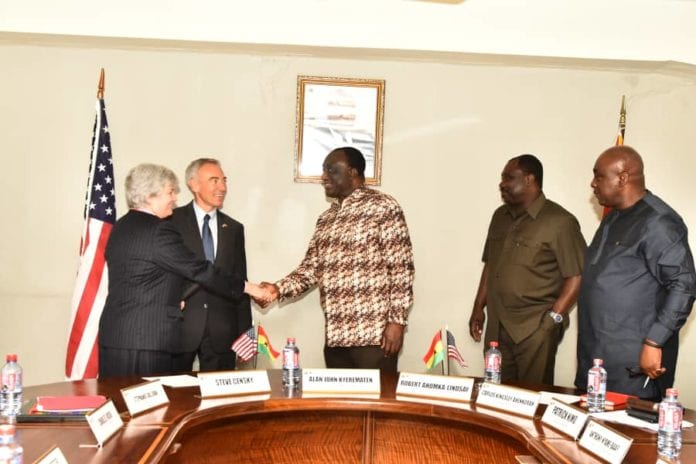 The Minister of Trade and Industry, Alan Kyerematen has advised a visiting United States Investment delegation to the country to pay critical attention to exploring partnership opportunities with Ghanaians in the areas of horticulture, medicinal plants, sheabutter, palm oil, industrial starch from cassava, cocoa and its derivatives.

He believes that, such partnerships will help propel the industrial transformation agenda.

The Minister made the remarks when he hosted the Deputy Secretary of the United States Department of Agriculture, Steve Censky and his entourage.

The team is in the country on an agricultural trade investment mission to explore opportunities to enhance what they term as the “Prosper Africa” Initiative.

“Prosper Africa” is a U.S. Government Initiative that seeks to unlock opportunities to do business in Africa – benefiting companies, investors, and workers both in Africa and the United States.

Touching on the African Continental Free Trade Area, Hon. Kyerematen noted that, with the combined population and economy of Africa as well as a much expanding middle class, Africa cannot be taken for granted.

He hoped that, the “Prosper Africa” initiative will help promote agricultural trade between the two countries, something that has not been achieved fully under the current AGOA initiative. He said this would help boost agriculture’s contribution to GDP.

The Deputy Secretary of the United States Department of Agriculture, Steve Censky, on his part indicated that his delegation hopes to engage in over a hundred and fifty (150) business to business meetings in the country before their departure.

With Africa having six of the ten fastest growing economies in the world and over one billion consumers, he said his delegation is exploring market access opportunities for products such as livestock, poultry, ethanol, among others.