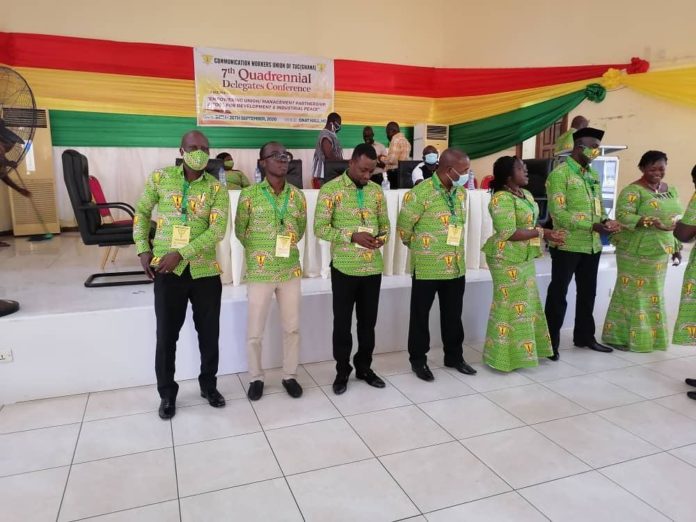 He said the partnership would also facilitate industrial peace and harmony at the various enterprises level in the country.

The two-day event was on the theme: “Empowering Union/ Management Partnership: A Tool for Development and Industrial Peace.”

He said there was enough evidence to prove that, good partnership movement had demonstrated its ability to provide workers with the means of obtaining decent work and of contributing to the high productivity of the organisation.

The Outgoing General Secretary said trade unionism had transformed from adversarial industrial relations to problem solving and now decision making, that was partnership; where there was improvement in organisational performance and productivity.

He said in seeking to strengthen partnership at the institutional level between the representative of Management and trade unions, there were some principles that needed to be reinforced to achieve a smart partnership.

Mr Ayivor said the principles of solidarity, self-management skills, collective participation in decision making and the promotion of equality and social justice could never be over repudiated.

He said the dialogue on working conditions should be based on transparency and respect for each movement’s role, since both management and the trade unions were defending the interest of the same group.

He said despite the advantages of partnership, there were still a lot of challenges and the relationship between management and union may often be problematic.

He said to a consideration extent, some of the challenges were associated with unparalleled understanding and hence, the need to build the capacity as trade unions.

“We can only empower the partnership by upgrading our skills and cognitive knowledge through trainings and workshops, so that our relevance will be felt with the support of government and management,” he added.

He said the level of insecurity and precarious jobs in the telecommunications industries calls for urgent attention and ‘we believed that through proper partnership we can bring industrial peace and harmony to this sector.’

He urged Ghanaians to continue to preach peace before, during and after the elections, calling on all to observe the various protocols to stay safe from the coronavirus.

Mr Victor Mario Coleman, the Outgoing National Chairman said to empower management and worker relations, it was necessary to take into account the institutions and parties involved, their ideologies and motives.

He said it was imperative to consider not only the legal dimensions but also the behavioural dimensions.
He said in an industrial life, there was always the need for labour and management to institutionalise dialogue and consultant.

“Through this process, the risk of confrontation between parties in industry can be substantially reduced while the gap of perceptions can be greatly bridged,” he added.

He said for industrial harmony to prevail, management should deal with each worker in a scrupulously fair and unbiased manner.

“It behooves on us too as workers to perform our duties well in the best interest of our organisation and within the scope of our responsibilities” he said.