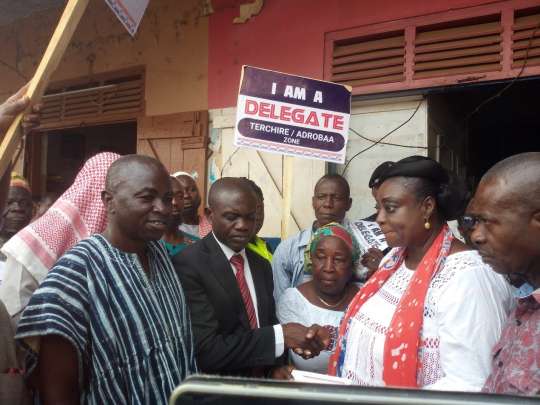 Mrs. Freda Prempeh, the Member of Parliament for Tano North in the Ahafo Region on Thursday said New Patriotic Party (NPP) delegates in the Constituency motivated her to seek-re-election in the supreme interest of the Party.

The leadership of the NPP has set April 25, 2020 to conduct parliamentary primaries nationwide at constituencies with sitting MPs to pave way for the election of candidates for the December 7 parliamentary election.

She told the Ghana News Agency (GNA) after submitting her nomination forms at the Party’s constituency office at Duayaw-Nkwanta that, there was no way she could disappoint the NPP delegates who impressed on her to go for re-election.

“They have rallied strongly behind me for the past seven years and I cannot disappoint them”, she stated.

Mrs. Prempeh was accompanied by hundreds of delegates, supporters and sympathisers in the constituency, who were clad in NPP colours and paraphernalia, and held placards with inscription such as “let’s maintain Freda for Party unity”, “Freda you deserve additional four years”, “Freda Toaso” and “No Freda no NPP”.

Addressing the crowd, Mrs. Prempeh who is the Deputy Minister of Gender, Children and Social Protection expressed appreciation to particularly, the delegates for their unflinching support towards strengthening the Party’s structures, while working to improve on the livelihoods of the people.

She indicated her re-election would enable her to complete the two-storey constituency office she was putting up at Duayaw-Nkwanta and other on-going educational and health infrastructural projects in the communities.

While appealing to ensure she had 100 per cent victory, Mrs. Prempeh called on her opponents to seek the interest of the NPP to retain the seat and win the presidential ballot as well.