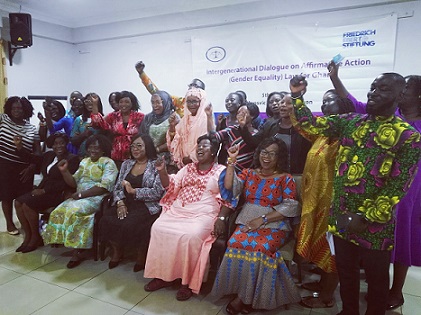 Over the years, various stakeholders have made efforts toward the enactment of an Affirmative Action (Gender Equality) Law in line with Article 17(4) of the 1992 Constitution of Ghana; yet it has not been possible to enact any of the draft Bills into law to date.

According to her, the intergenerational dialogue is being organised to discuss the need for the passage of the AABill into law and how to strategise to see the increase in women’s leadership in governance and other leadership positions.

This she said, the set goal was to see the AA Bill passed into law by 2020, but this was not realised.

Underscoring the importance, the importance of the law, she said there is a need for continued dialogue to ensure the passage of the Bill into law.

More so, research has shown that only 40 representing 14.5 percent women were represented in Parliament out of the 275 Members of Parliament (MPs),” she stated.

Stressing that, the Affirmative Action Bill seeks to encourage efforts toward addressing socio-cultural, political, economic, and educational gender imbalances in private and public sectors in accordance with Clause 4 of Article 17 of the 1992 Constitution.

The Executive Director, Advocates for Gender Equality, Mrs. Elizabeth Q. Akpalu, in her presentation, cited a lack of political will and commitment on the part of men which is hampering the passage of the Bill.

This she said, at now, the majority has less knowledge and understanding of the Bill.

The Executive Director of AfterSchool Ghana, Madam Kinna Likimani, also noted that without the active participation of women and the incorporation of women’s perspective at all levels of decision-making, the goals of equality, development, and peace cannot be achieved.

The Head of Programmes, Abantu for Development Mrs. Grace Ampomaa Afrifa, further called on the Ministry of Gender, Children and Social Protection and Cabinet to submit the Affirmative Action Bill to Parliament to ensure its passage.

The workshop is being organised by the Affirmative Action Bill Coalition with support from the Friedrich Ebert Foundation (FES).

How Binance is committing to gender equality in Africa and beyond