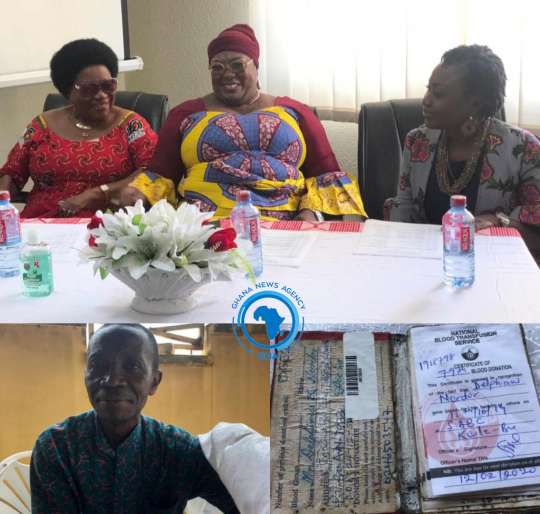 Dr Justina K. Ansah, the Chief Executive Officer (CEO) of the National Blood Service (NBS), says the executive and the legislature have unduly delayed the passage of the Service’s bill into law.

“The Ministry of Health is doing something about it, but it has unjustifiably delayed. I hope it could be passed before there is a change in administration.”

Dr Ansah said the absence of a law backing the operations of the Service, made coordination and implementation of its activities difficult.

“Law gives ‘hands and feet’ to policies so if policy exists without it being backed by law, then everyone does what he or she wants, which might not be good for the goals of the organization,” she said.

Dr Ansah said this in an interview with the Ghana News Agency on Thursday when the Service delivered its 2019 ‘Annual Performance Review,’ in Accra.

She said a law could help to keep the operations and standards of the Service in uniform, towards achieving one goal of helping to save lives through blood donation.

The collaboration between the NBS and Zipline Drone Delivery Company, she said, was successfully under operation, adding that, the Service has provided Zipline with two hard-to-reach sites in the Eastern and Ashanti Regions for it to deliver blood and blood components to health facilities.

The priorities of the Service for 2019 include strengthening institutional capacity and governance of the NBS, intensifying advocacy for 100 per cent voluntary unpaid blood donations, promoting national and international evidence-based practices in the delivery of blood services, and establishing nation-wide comprehensive quality management systems for NBS.

Others were expanding blood service infrastructure nationwide and strengthening partnership and collaboration with stakeholders.

The target set by the Service for voluntary blood donations nationwide was 50 per cent; however, it achieved 34 per cent; that of blood collection index per 1000 population was 7.0, but 6.0 was achieved, while target of samples tested for all transfusion transmissible infections was 100 per cent, which was wholly achieved.

“With some of them like capacity building and collaborations, we did excellent, but with donation of blood, that does not depend on us but the generosity of everyone.”

Mrs Tina Mensah, the Deputy Minister of Health, congratulated the Service for its achievements and pledged government’s commitment to support it to achieve its mandate.

Mr Delphinus Nordor, a 65-year old teacher, who was preparing to donate his 80th blood, told the Ghana News Agency in an interview that he was motivated to donate from 1981 till now because it revitalized him whenever he undertook the exercise.

He said it was also an opportunity for one to know his health status for free at every time, saying, a year would not pass by without he donating twice or trice.

“I discovered a Bible verse – Acts 17:26 that says God made all humans with one blood, so it means my blood can save somebody I don’t know. If everyone knows how another’s blood could save him or her, I believe all these wars and conflicts among countries, politicians and tribes will end,” he said.