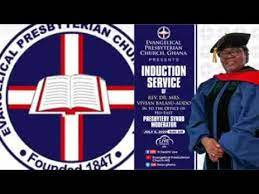 She said Dr Agidi’s humility, generosity, God-fearing, care and selflessness were worth emulating.

Rev. Dr Balasu-Addo said this in an interview with the Ghana News Agency on the sidelines of the burial service for the late Moderator at the Church’s Missionary Cemetery in Ho at the weekend.

She said the late Moderator was passionate about the work of God and the Church.

“He devoted his time, energy and comfort for the work of God and growth of the Church,” she said.

The Presbytery Moderator advised the pastors to turn to God for solutions to their problems and direction instead of the world.

“Live above reproach and be role models for the flock you shepherd,” she admonished.

The mortal remains of the late Moderator were interred at the Missionary Cemetery at Ho Kpodzi after the burial service.

He died at the Ho Teaching Hospital on 10th October, last year after a short illness.

The late Moderator, aged 65, was ordained as a Minister of the Church after completion of a three-year ministerial training at the Trinity Theological Seminary.

He served in different capacities in the church before his election in August 2014 and induction into office on 11th January 2015 as the 13th Moderator of the General Assembly of the church.

He was survived by his wife, Mrs Madeleine Akpene Kadji-Agidi and four adult children.

The Rev. Dr Lt. Col. (Rtd) Bliss Divine Agbeko, Moderator of the General Assembly of the Church, in a sermon said storms in man’s life were inevitable “but our Jesus is master over the storm.”

He said one could fast and pray but the answer lay with God adding “the death of a man of God is not the cessation of God’s power.”

The burial service, which was telecast live on Ghana Television, was attended by Dr Archibald Letsa, Volta Regional Minister, Mr Samuel Ampofo, Chairman of the National Democratic Congress, Parliamentarians, heads or representatives of sister Churches from Ghana and Togo and traditional rulers, among others.

Akatsi North appeals to investors to develop a crocodile resort