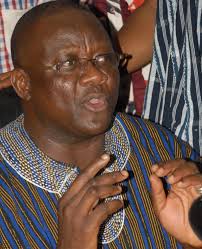 Suspended National Chairman of the opposition New Patriotic Party (NPP), Paul Afoko has revealed that the indefinite suspension slapped on him by the National Council (NC), the National Executive Committee (NEC) and the Disciplinary Committee of the party was an outright removal masked as a suspension. According to Mr. Afoko who is headed to the law courts to seek redress for the indefinite suspension handed to him, the constitution of the party forbids elected party officer from being suspended for more than one month. Anything beyond that timeframe is tantamount to the outright removal of that officer.

“…when suspension is invoked, it should not exceed one month Therefore the indefinite suspension of an elected officer is tantamount to a removal of that officer,” he stated in the press conference.

He is certain that the decision making bodies of the party were clandestinely coerced to circumvent the party’s constitution in what has been described as a Coup d’état in the main opposition party.

Even though he did not mention names, Mr. Afoko’s remarks on Wednesday in Accra in his first media encounter after he was suspended from the helms of affairs of the party, further fuels popular speculations that his suspension was directly influenced by the manipulation of the party’s flagbearer, Nana Akufo Addo who holds an inherent dislike for him.

Aids of Akufo Addo have publicly explained the reasons for this dislike as Akufo Addo’s suspicion that Paul Afoko was being used by his political rivals and opponents to scuttle his chances at the 2016 Presidential elections.

Mr. Afoko argued that he regard his indefinite suspension as a removal; in which case the constitution of the party stipulates that the party must get at least 40 percent of the delegates that elected him to petition the highest decision making body of the party-the National Council, for his removal. Afterwards, the he would be required to appear before a committee set up by the National Council to investigate the matter.

Only after this process is undertaken would be compelled to suspend the officer in not more than a period of one month before an Extraordinary Delegates Conference is held to decide on the removal of that elected officer.

The disciplinary committee sent their recommendations to the NEC through the controversial Freddie Blay, the 1st National Chairman asking him to convene an emergency NEC meeting to consider the recommendation for suspension.

Freddie Blay further went ahead to illegally convene a National Council meeting where they were urged to rubberstamp the recommendation for his suspension.

Paul Afoko said at this point, he raised a legal objection to the processes being adopted as being contradictory to the NPP constitution and conventions. His appeal was ignored, he said.

“Instead of the National Council deciding on the on the legal objection that I raised, they rather went ahead and affirmed the illegal decision of an illegal meeting in an apparent coercive manner…This is a clear breach of the rules of natural justice…,” he stated.

Meanwhile, emboldened by what he termed an illegality, NPP regional executives had taken cue from their headquarters and suspended over 21 constituency and regional officers of the party believed to be sympathetic to Afoko’s course.

“The question for now though is who will be the next and when will this [flippant suspension] end? All of these unconstitutional acts constitute a substantial threat to our vision of development in freedom. It is a threat to freedom of conscience, association and expression and constitutes a clear and present danger to our party’s values,” he said.

All along, Paul Afoko, said he knew some members of the National Council who were secretly against his candidature as the National Chairman of the party perceived as an Akan-centric party that resent other ethnic groups heading affairs in it.

On October 23, 2015 a NEC meeting described as illegal issued a statement stating it had suspended the National Chairman of the party indefinitely. They cited acts of constitutional breaches and acts putting the party’s image into disrepute as the reason for his suspension.

According to embattled Afoko, if however, the complaint was serious enough to warrant a removal, the due process had been outlined clearly in the party’s constitution. The party cannot unilaterally suspend him indefinitely, he said.

NIA Warned Against Guarantee For Non-Ghanaians

Badminton Association of Ghana speaks on suspension over outstanding bills