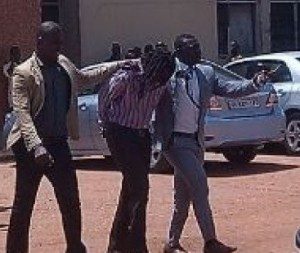 Gregory Afoko, one of the men allegedly linked to the murder of Alhaji Adam Mahama, the New Patriotic Party?s (NPP) Upper East Regional Chairman, on Tuesday, told a Magistrate?s Court in Accra that he has been sick. Afoko made the declaration when the court inquired from him whether he had some challenges confronting him whiles in custody, or not.

?I have been sick ever since this case began I need some medical attention,? Afoko, who has shaved off his dreadlocks, declared.

In the case of Musah Issah, who is standing trial with Afoko, he complained about the food offered to him custody.

?I am from the Upper East Region and I?m familiar not with some of the food here,? Issah said.

However, the case investigator told the court that Afoko had never complained about his health and if he was doing so now then the Police would immediately send him to the hospital.

Reacting to Issah?s comments, the investigator said it was Issah?s relations who had been bringing him food and if he did not find it tasty, then he should inform his relations.

The court, presided over by Mr. Worlanyo Kotoku, ordered the Police to provide the accused persons with the best medical care before the next adjourned date.

Afoko has been charged with murder, while Issah is being held for abetment of crime. Their pleas have not been taken and are on remand.

Meanwhile, the court said its ruling on the bail application, put in on behalf of the accused persons, was not ready and adjourned the matter to Friday, July 10.

Ms Bridgette Ampadu, who held the brief of Mr. Ekow Ampaw Korsah for Afoko, said they needed the ruling of the court in order to take a step in the matter.

Mr. Alfred Agyei-Mensah, who represented Issah, wanted to know if the prosecution had brought a letter seeking an adjournment or their inability to come to court.

Mr. Mahama was attacked with acid on his way home and later died in the hospital in May.

He reportedly named some of the persons who attacked him.

According to the Police, Afoko after his arrest, was asked to lead the Police to the house of his accomplice, Asabke Alangdi but ?he rather took them to the father?s house.?

The Police said they later located the house of the second person but the suspect had gotten wind of their presence and absconded with his wife, leaving behind their baby.

A gallon, which allegedly contained some of the substance, and a plastic cup, were retrieved from the scene for forensic examination,? the Police stated.

The Police have disclosed that: a ?Post mortem examination was conducted on the body of the deceased and the Pathologist gave the cause of the death as shocked lungs and extensive acid burns.?

Musah Issah was arrested for allegedly buying the acid that was used for the attack.