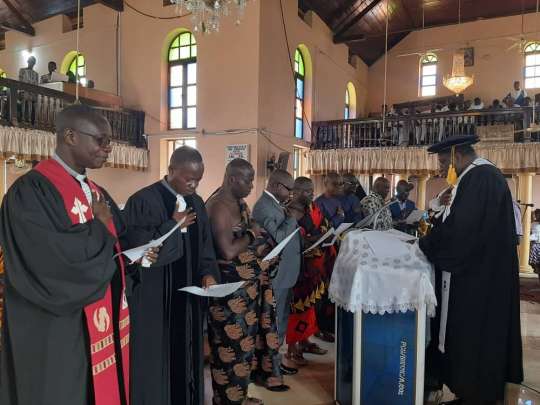 The Presbyterian Church of Ghana(PCG) has inaugurated an interim organising committee to oversee the process and preparations towards the establishment of the Presbyterian College of Health at Begoro in Fanteakwa North District, of the Eastern region.

The Presbyterian College of Health, which would be an institution for training of laboratory technicians and other allied health professionals, would be the first of its kind in the region and it is expected to fully take off, by the close of the year 2020.

The terms of reference for the committee under the convenorship of Reverend Dr Seth Kissi, Akyem Abuakwa Presbytery Chairperson is to assess the building structure of the former Begoro Presbyterian Vocational School (PREVOC), which is being turned into the College of Health in order to work out the cost of renovation, initiate process for accreditation for the final take-off of the school by the next academic year in September.

Reverend Professor JOY Mante, Moderator of the Presbyterian Church of Ghana (PCG) who inaugurated the committee noted that the PCG had 55 health training facilities in the country to complement national development.

The Moderator indicated that the implementation of the Free Senior High School (SHS) required expansion and more tertiary institutions and that the establishment of the Health College had come at hand to offer tertiary education to majority of the beneficiaries.

Rev. Mante, charged the committee to work hard to ensure that the proposed time for the take-off was realised to provide an avenue for progression for the free SHS beneficiary and presented a seed money of Gh¢50, 000 from the Church in support of the preparations towards the school’s establishment.

Rev. Dr Kissi, Chairperson and convener of the committee thanked the Church for the confidence reposed in them and assured that they would diligently pursue the charge given them for the benefit of the Church and nation.

He, however, appealed to the indigenes of Begoro both home and abroad and the entire Akyem Abuakwa to come out in their numbers and support this noble idea by the church to complement government’s educational efforts.