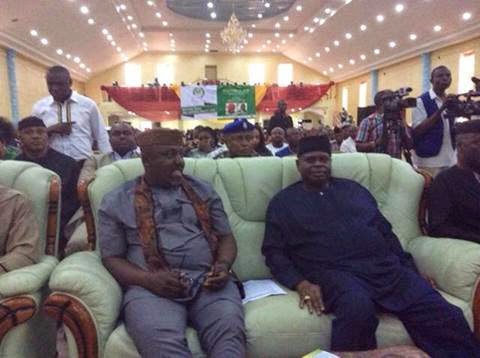 ?Says Igbo Leaders In PDP Are Cowards
Governor Rochas Okorocha of Imo State has revealed the unsuccessful attempts made by the Peoples Democratic Party, PDP, in Abuja to remove him from office.
Speaking at the inauguration of the state executive of the All Progressives Congress, APC, on Friday at the International Conference Centre in Owerri, Okorocha disclosed that the 26 out of the 27 members of the Imo State House of Assembly were brought to Abuja and given N100Million each to impeach him.
He said that one of the lawmakers even brought his own money to him (Okorocha), a development he said that shocked him to shrink at the extent of desperation the PDP could go to be in power.
The governor queried ?What have I done wrong in Imo that these people will be after me like this? Haven?t I done everything that I promised to do for Imo people?  PDP has so annoyed me and they have forgotten the kind of person I am?.
Okorocha expressed regret that all the people that milked the state dry were now in PDP and had been ganging up against him and the people of the state, an act he said he must frustrate.
According to him, the gang up started from Oguta Local Government Area during the run up to the Oguta Constituency rerun election where the PDP candidate, Eugene Dibiagwu and some thugs, acting on the instruction of their masters, blocked his convoy from entering the community.
This, he said, was followed up by Senator Chris Anyanwu who was used by the PDP to ram into his convoy at Azara Egbelu near Owerri.
?Yet, I didn?t react negatively as I am expected because that was a bridge of protocol and security.?
The governor said the worst that happened to him was another gang up in Oguta during the burial of Late Jurist, Justice Chudifu Oputa ?where Ohakim, Araraume, Chris Anyanwu, Udenwa, Ilomuanya and others were present and running up and down like rats. I paid N10million for the late Jurist?s hospital bill and another N25million for the burial arrangement and additional N6million to pave the state High Court Premises in honour of Justice Oputa. Then I moved with the state entire state executive council to pay my last respect to an achiever. I went to the altar to speak as the number one citizen of the state, a microphone was snatched from my hand. Which governor in Nigeria would have tolerated all these? PDP has annoyed me o and they have forgotten who I am?.
He said having failed in their bid to bring him down at all cost, the PDP started paying N5000 each to bus and keke drivers and people at newspaper stands to castigate the APC as a Muslim and Boko Haram party because I prevented them from bombing a church here, insisting that APC is not Boko Haram.
He insisted that he had achieved more in three years than the 12 years of PDP put together, adding that he had no basis for comparism when put side by side with the likes of Arthur Nzeribe, Araraume, Ohakim, Chris Anyanwu, Udenwa and others.
Okorocha describe Igbo leaders in the PDP as cowards who see good and call it bad because of the paltry position they want to protect in the party
In his word, ?That?s why they will always go to Abuja to say I have done nothing and that free education is not real. Onye na-esighi ike, akuo nwanne ya ihe, ya sin a nwanne ya na-acho okwu (meaning: a coward would always claim that his oppressed brother is troublesome)?
While charging the newly inaugurated state executive of the party to challenge the opposition with the Rescue Mission projects in all their communities across the state, he donated 150 units of Siena and Passat cars for the state and local government officers of the party.
Meanwhile, there was no national officer of the APC that attended the event, not even Senator Osita Izunaso from Imo state, fueling more speculation that the governor wants to quit the party.
Send your news stories to newsghana101@gmail.com and via WhatsApp on +233 244244807 Follow News Ghana on Google News