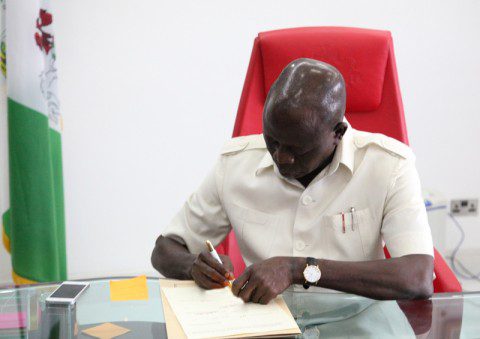 Edo State governor, Comrade Adams Oshiomhole, yesterday accused the Peoples Democratic Party (PDP) of plotting to change the leadership of the State House of Assembly, alleging that the party paid huge sums of money received from Abuja to some Edo lawmakers in an attempt to commence impeachment moves against him.

However, one of the APC lawmakers who defected to the PDP had earlier denied any plans by the lawmakers to impeach the governor, but added that they would not hesitate to exercise their constitutional responsibilities should the governor commit an impeachable offence.

Oshiomhole spoke yesterday at the Government House, Benin while addressing thousands of youths mainly from Edo Central senatorial district under the aegis of the Initiative for Youth Awareness on Immigration, Development and Reintegration, led by Comrade Solomon Okoduwa when they paid the governor a solidarity visit.

While commending the youths for the visit, Oshiomhole said, ?I know you have read in the newspapers that some of them are planning through corrupt means to change a popular mandate that was conferred on me by the great people of the state including your good selves. History will have it whether they like it or not that for the first time in Edo Central, North and South, everybody voted for me overwhelmingly in all the local governments.

?Now they have brought in a lot of money from Abuja, paying assembly members who we campaigned for, marketing some of these people who are not known in their neighbourhoods; they rode on my back to get to the House of Assembly. Some of them cannot walk on their streets. They collected as I read in the papers huge sums of money to mortgage and put on hold the mandate you all in your respective areas gave them on the basis of the promise that they would work for me to deliver Edo State; they have become merchants of mandate?.