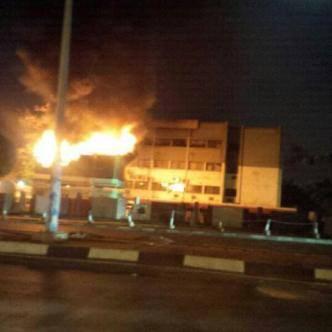 The ruling Peoples Democratic Party (PDP) has ruled out any form of sabotage, following the fire incident that gutted its press center on Monday night.

The ugly incident, which occurred inside PDP headquarters in Abuja, was a second tragedy in Abuja, after a car bomb blast claimed over 100 lives, and left over 200 seriously injured around 6:45 a.m. at a popular El-Rufai Park at Nyanya.

An eyewitness claimed that the party?s headquarters was engulfed in fire around 7:30 p.m.

Two portakabin stacked on top of each other, which the party uses as its press center were completely razed to the ground.

The party?s publicity secretary, Olisa Metuh, said the fire started from an air-conditioning unit in one of the cabins, and had been put under control.

A short statement he issued in Abuja said the party rules out sabotage.