The Minister of Aviation, Chief Osita Chidoka and the Director of Jonathan-Sambo Campaign Organisation in Anambra State, Chief Okey Ezenwa have charged candidates and supporters of the party to brace up to deliver a landslide victory to the Peoples Democratic Party (PDP) in the forthcoming general elections, next month. 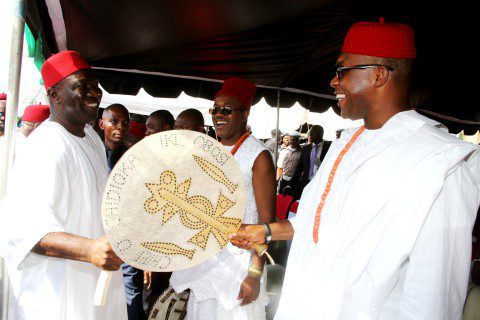 The Minister who spoke at the backdrop of the recent Appeal Court pronouncement on the party’s candidates stated that with the development, it has become a big challenge for the candidates to work twice as others for the victory for PDP in all the elections.

However, The National Publicity Secretary of PDP,Chief Olisa Metuh,who attended the meeting and made clarification on the real candidates Anambra PDP for the elections, appear to have thrown members into more confused state when he contended that as far as those of them in the National Working Committee (NWC),the list of party candidates for the forthcoming elections have been submitted long ago by them and they stand by that list.

This bombshell was dropped at a stakeholders’ meeting of the party held over the weekend in Awka and attended by most of the party heavyweights in the state.

Chidoka who addressed PDP members and supporters on his capacity as the leader of the party in the state flanked by Ezenwa and the other key Stakeholders,said that they decided to re-engineer the party so that the voters would give PDP candidates maximum support in the coming elections.

According to the minister, “We have to work ward to ward and communities to communities to ensure that our people gets their permanent voter card (PVC) and that those voting,should vote for PDP”.

He disclosed that the Igbos are supporting the re-election of President Jonathan,because they are Republicans who cherish their fundamental freedom and the human rights that would create the enabling environment for their entrepreneural ability to thrive without hindrance.

The Minister used the gathering to charge all traditional rulers in the state to ensure that peace reign in all their domains before, during and after the general elections. He therefore directed them to go home and educate all their subjects on the need to collect their voting cards and ensure that peace reigns all through in their communities during and after the elections.

Chidoka said that Anambra people do not support any form of violence and that he was hopeful that Ndigbo would remain law abiding and ensure peaceful elections, despite what has been happening in other parts of the country.