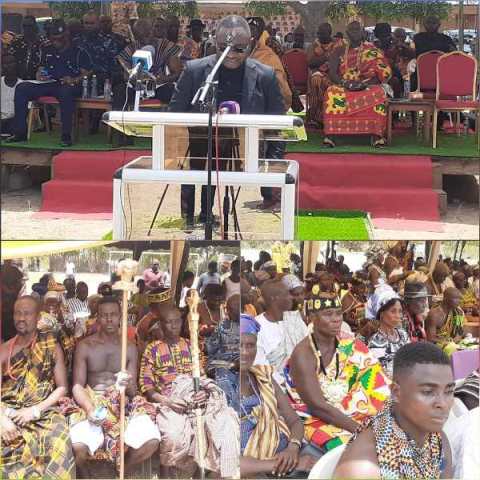 Torgbe Kowu Adzowe (VII), Awadada of Agave Traditional Area has asked the indigenes of Agave State to uphold peace and unity for the development of the area.

He said without peace and unity, no traditional area would have a meaningful development.

Torgbe Adzowe who was addressing the 2020 Agave State Dzawuwu festival said conflicts and misunderstandings were common enemies of development and must be avoided.

This year’s celebration is on the theme, “rebranding Agave State for peace, unity and development,” and attracted indigenes living abroad, tourists and the clergy.

Togbe Adzowe asked kingmakers of the Agave Ivory Stool to bury their differences and resolve issues of succession to the stool of a paramount chief.

“Agave Traditional Area does not have a representative at the Volta Region House of Chief because we do not have a Paramount Chief, let’s address this and get counted,” he said.

Mr. Kobby Mensa Woyome, the Member of Parliament for South Tongu District also asked the people of Agave to be united for growth.

He asked religious leaders and traditional leaders to promote peace and unity through, adding that, ” security in the South Tongu District must be taken seriously and I have plans to hold town hall meetings with the youths, security agencies and the District Chief Executive to find out what we need to do.”