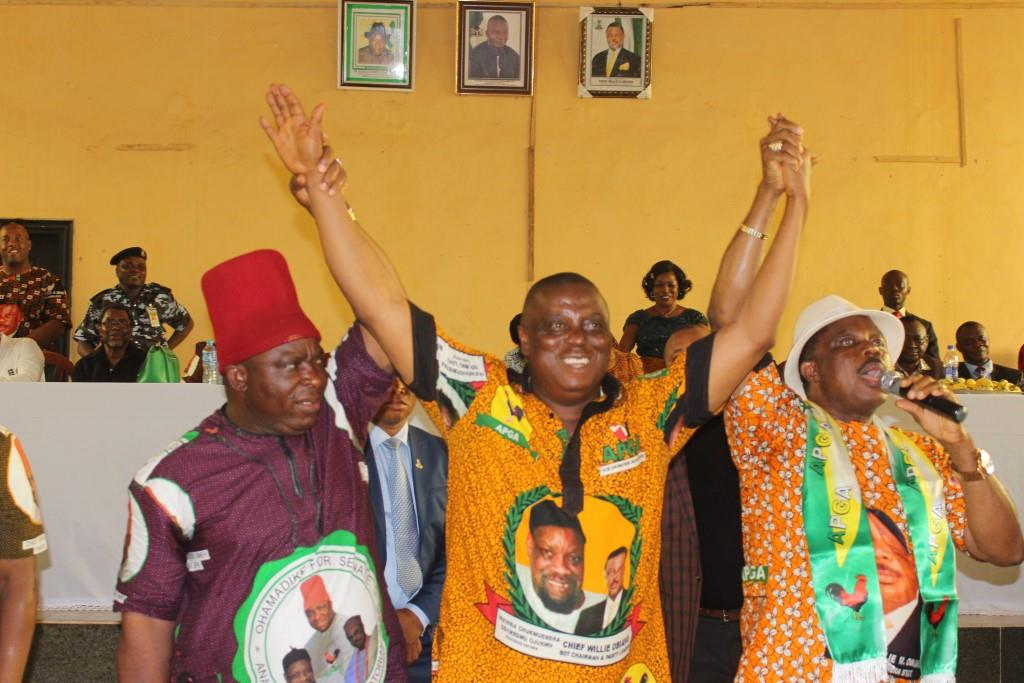 The people of Agulu, an important town in Anaocha Local Government Area of Anambra State have pledged total support to the Governor of Anambra State, Chief Willie Obiano and unanimously endorsed the APGA Senatorial candidate for Anambra Central, Chief Victor Umeh and other candidates of the party in the coming elections. Declaring their support yesterday during an interactive session at Agulu Town Hall in Anaocha, the people who trooped out in their thousands to receive the governor?s entourage applauded the APGA led government for initiating numerous developmental initiatives across the state and giving their community a fair attention.

Speaking through the President General of the Town Union, Chief Paulinus Aniagboso, the people thanked Governor Obiano for his exploits in the area of security of lives and property in the state lauding him for his sustained efforts to complete the prestigious Agulu Lake Resort Hotel and energizing five transformers and installing streetlights in the town.

Also speaking on behalf of other village heads, Mr. ChukwudiIgwe commended Governor Obiano for keeping his promise of continuity and assured the governor and his team that the people of Agulu would queue behind APGA candidates en-masse in the coming elections to enable the governor sustain the tempo of good governance.

Speaking too, the President of the General Women Wing of the Town Union, Mrs. Theresa Akubueze assured that the women of the area would throw their weight behind the governor and APGA candidates in the coming elections.
Speaking in a similar vein, a community leader and Senior Special Assistant to the governor on Inter-party Affairs, Chief Ben Obi noted that Agulu people had demonstrated in clear terms their support for APGA in the coming elections.

In his own remarks, the APGA Senatorial candidate for Anambra Central, Chief Victor Umeh observed that Governor Obiano had continued to fulfill the promise of continuity which entails the completion of all on-going projects in the community and recalled that Agulu people had over the years given APGA total support as a platform that would facilitate the realization of the Igbo Agenda and the best interest of the people.

Chief Umeh further assured the people that their son, the former governor of the state, Chief Peter Obi was not forced out of the party as was widely speculated but left on his own volition.

In her own remarks, the Commissioner for Local Government Affairs, MrsAzukaEnemo described Governor Obiano as a man of courage who has remained consistent in his implementation of his policies and programmes. MrsEnemofurther noted that the governor has created a secure environment for investments to thrive in order to create employment opportunities for the youth.

Responding, Governor Obiano thanked the Agulu people for the support they have given to his administration and APGA so far and assured them that there was no animosity between him and the former governor of the state, Chief Peter Obi, who is from the town.

According to him, the only difference between them is in the area of political ideologies as Chief Obi now belongs to another political party. Governor Obiano further extolled the achievements of his predecessor and assured the Agulu community that he would work hard to surpass him in the area of providing amenities to them.

Said he; ?Let me assure you that I will work very hard to develop Agulu even more than my predecessor did. I will work for you. I will expand development in Agulu. As most of you here know, I do not promise what I have no intention to do. Whatever I say is what I will do,? the governor assured.

Governor Obiano also restated that his administration was working on all projects initiated by Chief Obi and would complete all of them in record time in spite of the dwindling revenue profile of the state resulting from the fall in oil prices. He assured them that new projects would soon be awarded in the community.

Also speaking at the ceremony, the wife of the governor, Chief Mrs Ebelechukwu Obiano declared that the good relationship between former Governor Obi and Governor Obiano would remain strong and would never be threatened by politics. Mrs. Obiano also thanked the people of Agulu for their support.