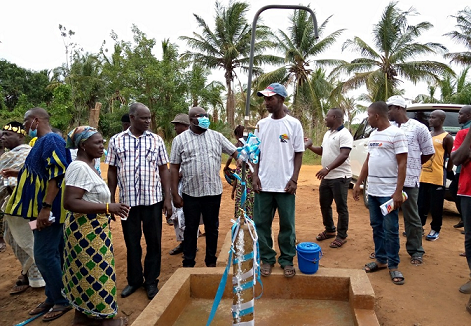 Residents of Sovi-Amematekporkope in the Ketu South Municipality have heaved a sigh of relief after an extension of pipe-borne water to the community to solve the water problem there.

Located in the Klikor Electoral Area, the community had for years lacked potable water, forcing residents to walk long distances to neighbouring communities in search of water especially during the dry seasons.

He said the GH¢32,965.00 project, which involved laying of pressure pipes to allow for water supply extension from Klikor to the community could be deemed as a life-saving venture for “water is life.”

Mr Agbenorwu charged the board constituted to take charge of the standpipe with Mr Godwin Dogbatsey as the Chairman, to effectively manage the proceeds from the sale of the water to residents in order to raise enough money to refund Mr Quarshie.

Mr Quarshie, a government appointee of the Ketu South Municipal Assembly, said he made the promise to help extend the water while on a visit to the community during the 2020 campaign period.

He noted the plan was to carry out the project even before the December 07 elections, saying he believed the people were disappointed about the delay, which reflected in how they voted for the Party.

Mr Quarshie, the elder brother of Mr David Tiahno Quarshie, the 2020 New Patriotic Party Parliamentary Candidate for Ketu South, said he was committed to fulfilling the promise and mentioned that plans were underway to fulfil the other promise of a corn-mill to the people.

Mr Jacob Maconi Dalete, Assemblyman for the area on behalf of the people, expressed gratitude to Mr Quarshie for bringing an end to the age-long water problem there saying, his people would be spared the hustle for clean water for their daily activities.