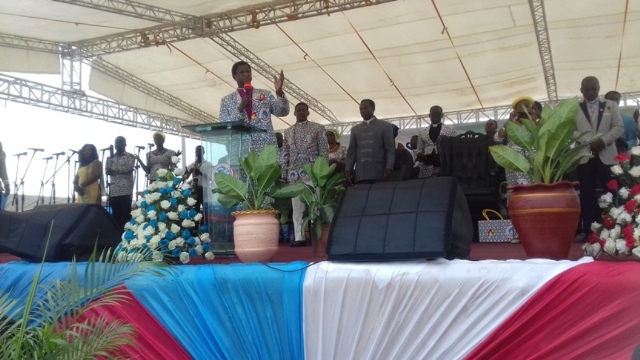 Apostle Dr Kwame Ntow Amoani, Chairman of the Christ Apostolic Church International (CACI) has regretted that the church is gradually losing its grip on society allowing leaders to exhibit high level of self-centredness.

He said most Christian leaders in Ghana were not preaching the word that would produce the dedicated Christian that would be committed to the Christian values devoid of vices and malpractices including corruption, but were rather focusing of things that would fulfil their selfish gains.

“People placed in high positions should rather be spirit-filled to make an impact on the society, especially in the communities in which they live”, he said.

Apostle Amoani was addressing the thanksgiving service organised by the Accra South territory of the CACI as part of the Centenary Celebration of the Church in Accra on Sunday on the theme “100 years of impacting the world through Pentecostalism”.

The Accra South Territory consists of Nungua, Nima and Pig Farm Areas of the Church.

He said many Christians failed to see God’s glory in their lives because they refused to follow the steps of their forefathers, who were filled with the Holy Spirit and were guided by it in all their endeavours.

Apostle Amoani said the founders of Christianity, particularly the twelve Apostles who included; Peter and John, pursued the desires of the Holy Spirit and were consequently made strong and powerful to defeat all life challenges.

“I therefore challenge and encourage Ministers of the gospel to speak on the wrongdoings of Ghanaians especially the leadership to help them to deliver on their mandate of pushing the nation forward in her developmental agenda for the benefit of all.”

He urged Christians to do things in conformity with the core values of their belief through the Holy Spirit, as demonstrated by their founders, adding that those leaders focused on maintaining a direct relationship with God by living according to the dictates of the Holy Spirit.

Apostle Amoani also challenged Christians to follow the principles of the Acts of the Apostles as captured in the Holy Bible as a way of seeking spiritual restoration to achieve God’s glory.

He appealed to the Christian community to support government in its quest to develop the country, because the leaders could not rely only on their academic abilities, but also needed the directions of the Holy Spirit to deliver on their mandate.

Mr Odotei, who is also the Member of Parliament for La Dade Kotopon constituency said: “We need the church to support the President to carry out his vision of nation building for the benefit of Ghanaians and the future generation as well”.

Apostle Joseph Sakyi, Director of Christian Education of CACI led the congregation to pray for the nation, President Nana Addo Dankwa Akufo-Addo, his team of ministers and other national leaders.