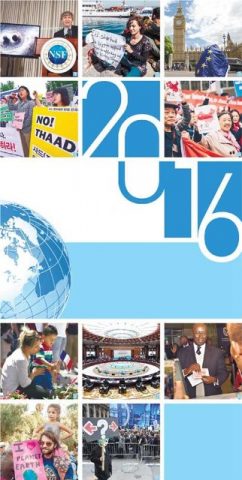 In 2016, the world underwent profound changes. 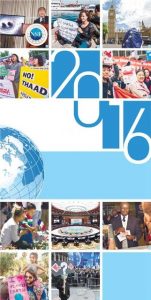 With Brexit and the election of Donald Trump, the world witnessed two “black swan”events. The rise of far-right parties and populism in Europe are posing an unprecedentedchallenge to globalization. Meanwhile, the threat of terrorism shows no sign of abating,indicating that the world needs a new approach to counter-terrorism. Security in northernAsia, which is veering away from the path of peaceful development, has attracted concernfrom the international community. All the while, China has been steadily moving forwardby tackling hard issues and embracing reform.

Amid these often disturbing developments, China has boosted the world’s economy byhosting the G20 summit, made essential contributions to activating the Paris Agreement,upped its participation in global financial governance by the inclusion of RMB in theInternational Monetary Fund’s Special Drawing Right (SDR) basket, and won support inopposing the invalid South China Sea arbitration.

The universe always moves along its own path, and history will never stop marchingforward, despite temporary disturbances. Time will flush away fear and tears; peace,justice and inclusiveness are the laws of nature. Looking ahead, the year 2017 is full ofhope.

2. Refugee crisis in Europe continued, populism rose
The huge influx of refugees has caused social issues in a number of European countries,prompting members of the EU to tighten refugee policies. In May, the EU Council allowedsome countries within the Schengen Area to extend internal border control, and theEuropean Commission proposed extending the measure. In December, Italian PrimeMinister Matteo Renzi resigned after a major constitutional referendum failed.Meanwhile, populist parties such as the National Front in France and the Alternative forGermany are gaining popularity around Europe.

3. Britain voted to leave EU
Over half of British voters voiced their preference to leave the EU in a June referendum,and Britain’s prime minister resigned shortly thereafter. The country will officially startworking toward Brexit before March 2017. Brexit has left other European countriesanxious in the face of economic depression, the refugee crisis and terrorist attacks. Thisgrowing anxiety and desire for change is challenging the unified identity of Europe.

4. South Korea, the U.S., North Korea and Japan made momentous decisions,adding to security concerns in northeast Asia
In July, South Korea announced plans to deploy THAAD (Terminal High-Altitude AreaDefense). Before and after that, North Korea conducted two nuclear tests. Since March,Japan has implemented new security laws and passed a new version of the Defense WhitePaper to boost the operational and geographical scope of Japan’s forces oversea, whichmeans Japan has abandoned its pacifist constitution.

6. Fresh global terrorist attacks raised concerns
On July 14, at least 84 people were killed in a terrorist attack in Nice, France. On Dec. 19,the Russian ambassador to Turkey was assassinated. Terrorist attacks have plagued manycountries this year, including Belgium, Turkey and Egypt. At the same time, anti-extremism wars are ongoing in Iraq and Syria. In many ways, terrorism has globalized,becoming more fragmented and widespread. China’s proposition to consolidate the role ofthe UN in coordinating counter-terrorism efforts has been widely recognized.

８. RMB included in Special Drawing Rights (SDR) basket by IMF, ascendingto heart of global finance
On Oct. 1, the RMB officially joined the SDR basket for the first time, in a landmarkrecognition of China’s increased role in the global economy. The milestone demonstratesmajor progress in the evolution of the international financial system.