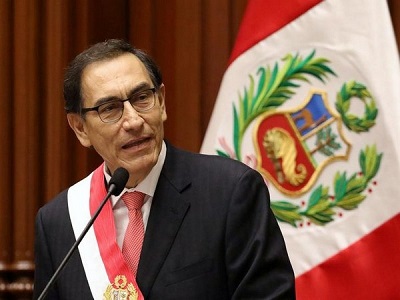 Peruvian lawmakers voted to launch new impeachment proceedings against President Martin Vizcarra on Monday, less than two months after he survived a previous bid to remove him from his post.

In Peru’s Congress, 60 representatives voted in favour of impeachment proceedings, 40 voted against and 18 abstained.

A vote on his removal from office could take place as soon as next Monday. Eighty-seven votes are required to remove him from his post.

Vizcarra is accused of taking 2.3 million soles (636,000 dollars) of bribes from a construction company during his time as governor of the Moquegua region from 2011 to 2014.

He denies the allegations and accuses the opposition of trying to destabilize the country.

He survived a previous impeachment vote in September. Those proceedings were based on accusations that he tried to obstruct an investigation into government contracts worth some 50,000 dollars given to a singer.

The little-known singer allegedly held motivational courses for employees of the Culture Ministry, despite not being qualified to do so.

Vizcarra, who does not belong to any political party, took over the presidency in 2018 after his predecessor Pedro Pablo Kuczynski resigned over corruption allegations.

Vizcarra has already clashed with Congress over an anti-graft offensive last year.
Peru’s presidential and parliamentary elections are due to take place in April next year.