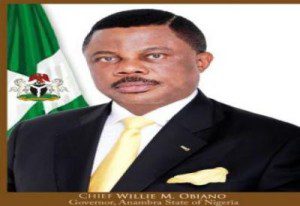 Prior to the 2015 General Elections, they had cooked all manner of lies and malicious stories aimed at blackmailing Governor Obiano presenting him as a prodigal son who forgot his godfather, Obi in the evil forest.

During the election, they employed all forms of physical and virtual forces to cause disaffection between Obiano and the then president, Goodluck Jonathan. Peter Obi went steps further by personally supervising and ensuring that the National Assembly election results in the state were manipulated and many voters injured as the former governor (once followed by his people) turned against same people in a “do or die” attempt to install a concubine as a Senator and probably destroy same Party on whose platform he rose to fame.

As the election ended with a historic victory for APGA in the state House of Assembly elections, a party that has been in upward surge since the departure of Peter Obi, these never do wells took to their trade of hate to register their frustration as their paymaster lost grip of power at the centre.

They have framed all forms of indecent stories. If they are not hitting directly at the person of Willie Obiano, they are hitting at his family, APGA as a party and most recently at every policy of the State Government.

They’d claim to be critics and as such appendages of a healthy democracy but they insult instead of criticize.

Unfortunately, the unperturbed governor Obiano has through classy performance in about a year in office surpassed all their doom?s day prophesies.

I recall Val Obienyem asking where on earth will Gov Obiano get the money to complete the 3 flyovers under construction at Amawbia, Kwata and Aroma Junctions. Today, his Facebook jesters after being wowed by the speedy rate at which the project is being completed have changed their dance steps. They now ask irrelevant questions like “do we need the flyovers”. That is left for Ndi Anambra to answer.

Few days ago, I read where Obi’s Facebook clown, APGA Alaigbo aka Mazi Odera was asking why road accidents, fire out breaks and fuel tanker explosion all happened within a space of two months. In an attempt to malign the Office of the Governor of Anambra State, he queried if the gods are angry with our leaders. Though I laughed at the poorly prepared write up and pitied the uninformed Mazi Odera who chose to play with the death of fellow humans, I felt a pity for him for his inability to understand that the ways of the gods and that the gods cannot be angry with the righteous.

Is it the restriction of motorcycle and tricycle? Obi did everything possible through his boys to heat up the polity against a man who took a very courageous decision for the welfare and safety of lives and property of Ndi Anambra. Their attempts to mobilize Okada riders for a riot also failed.

Most laughable is the increasing rate at which these enemies of progress generate falsehood in an effort to pitch the dynamic governor of Anambra against his people. They now report events which never took place. Isn’t that madness?

Most recently was a report that Zik Avenue Business Association (whatever that means) went on a protest over tax. This report isn’t just false but the author refused to understand that governor Obiano has not increased any tax but only ensured prudence and transparency in the affairs of Internally Generated Revenue Board. Today, Anambra’s IGR has more than doubled and the people are ready to pay more as they are witnesses to the effective use of tax payer?s money by the present administration.

Even those who claimed that governor Obiano has “squandered” the Naira component of Peter Obi’s mysterious savings are back with a different song, insinuating that Anambra is currently paying his workers solely because of the same money they alleged that Obiano has finished.

These desperate attempts can only put peanuts and devilish smiles in the pocket and on the face of their perpetrators but cannot deter the actively working governor of Anambra State.

Take it or leave it!

by Kinsley Udemezue writes from Nanka