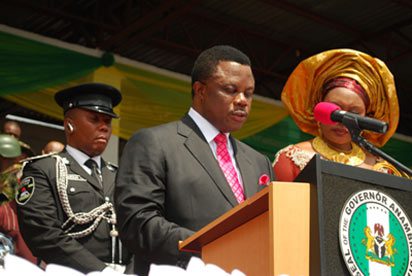 The new government of Anambra under the leadership of the All Progressive Grand Alliance [APGA] governor, Chief Willie Obiano may have found itself turning a new triumphant corner following new developments in the existing battle between the former governor of Anambra State, Chief Peter Obi and the present governor. Information available to 247ureports.com obtained through a consortium of sources knowledgeable of the activities inside the governing circles of Anambra State and of the activities near the former governor, indicates the latent war may have gone in a different direction against Chief Peter Obi?s desire and/or expected direction.

As a caveat, the arrival of the present governor to the government house in Awka in the early months of 2014 saw the financial picture of the state government contrary to the picture painted publicly by the outgoing governor. The financial integrity of the state treasury seemed dangerously in disarray and criminally mismanaged, according sources who also revealed to 247ureports.com that the governor of Anambra State was forced to freeze some of the sensitive government funds lounged at some of the Banks in Awka. Available information indicates that the governor was left with limited options when numerous cheques issued by the Peter Obi administration continued to trickle-in several months after the Peter Obi administration had left the government house. A competent source in Abuja who confirmed that the treasury of Anambra was near empty at the exit of the Peter Obi administration revealed also that a significant [over 80%] of the newly flagged off projects at the eve of Peter Obi?s exit from the government house were not financially budgeted for. No monies were made available for the said projects. ?They were traps set for the incoming government? said the source who continued to add that the projects were mere ?politically laced projects? targeted to tie the incoming governor into a financial quandary ? so as to ensure the Peter Obi administration remains a popular administration to the populace of Anambra ? and not to be outdone by the Obiano administration.

However Willie Obiano?s arrival to the government house came with what appeared accidental anomalies which enabled the new administration to sidestep the ?traps?. Governor Obiano?s hesitation to go public over what his administration found on the ground concerning the financial situation coupled with the governor?s political naivety ? is believed to have enable the governor to engage the executors of his program in a less rancor environment. He was quick to launch a popular project aimed at eradicating crime and criminals from the Anambra geographical sphere ? in a manner devoid of political rancor normally witnessed in the state.

The impact of the security sweep of the cities and communities of Anambra was pragmatic and intimately felt by the residents of the state and by the wider diaspora. The project was deemed a success. As expected, the political dividends was bountifully reaped by the new administration. To many of the residents of the state, Obiano had begun to prove his worth. The Obiano administration gained instant acceptance devoid of his predecessor?s making.

Unsure of how to read the political ?tea leaves? of what the abnormal rise in acceptance by the people of Anambra of Obiano, Peter Obi?s men and women opted on combative response. They decided on publicly abandoning the Obiano administration in the hopes that the administration will turn a political orphan ? to be swallowed up by the Peoples Democratic Party [PDP]. ?They publicly abandoned the All Progressive Grand Alliance [APGA] while Peter Obi abandoned his seat at the APGA Board. Simultaneously, media reports on allegations of financial mismanagements against the Obiano administration began making its way into the public. Some of the reports insinuated the governor to be an alcoholic. The governor?s wife was not spared. Her name was distastefully brought into the propaganda. Efforts to showcase the Obiano administration as unfriendly to the President of the federal republic of Nigeria, Dr. Goodluck Ebelemi Jonathan where made by the Peter Obi group to appreciable extent to the presidency ? with the aim to render the Obiano administration susceptible to possible impeachment threat. Many with the Anambra State legislators were coopted into abandoning the APGA for the PDP.

But the political tide failed to turn against the newly elected governor. What seemed improbable to the political jingoist of the Anambra Theater appear to have occurred. The newly elected Governor appeared to have survived the onslaught ? and have maintained a friendly face at the presidency. Unsettled, the Peter Obi team changed their approach from combative to apologetic. Authoritative information made available to 247ureports.com indicates that Chief Peter Obi recently sought private audience with Governor Willie Obiano and Chief Victor Umeh. The meeting was held at a ?neutral? ground last week. Only the three personalities were present inside the closed door meeting.

The details of the closed door meeting remains a tightly guarded secret. But aides to the personalities speculate based on informed background that the Peter Obi led team have decided to call a truce. According to one of the aides, Peter Obi wanted the governor to overlook the political cold war that had held captive the Anambra sphere in the recent weeks ? and forge a common front against the opponents of the President in the coming presidential elections of 2015. The outcome of the meeting remains uncertain.