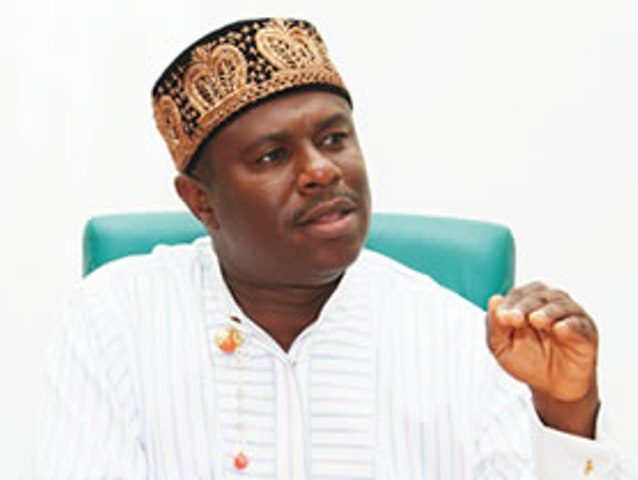 ?A Leader is one who knows the way, goes the way and shows the way? ? John C. Maxwell.

Until the All Progressives Congress picked Warisenibo Dakuku Adulphus Peterside as its governorship candidate in Rivers State, there was confusion and palpable fear about the future of the state. Many big-wigs of the Peoples Democratic Party [including some founding members of the party] had cause to reconsider their membership of a party that has become anything but democratic, and so did the ordinary people wonder if governance in Rivers State had become the exclusive preserve of a charmed circle of political patrons and their benefactors.

Contrary to the existing principle of power rotation among the various ethnic groups and the people?s desire for a humble and charismatic leadership, the Abuja dictators hand-picked the former Minister of State for Education, Nyesom Wike as its preferred candidate. And when the victims of the PDP political machination kicked against injustice, some of them were hounded and brutalized right in the premises of the party?s national secretariat in Abuja. Rivers State was a political time-bomb waiting to explode on account of injustice, until the simple, humble and charismatic Dakuku Peterside emerged on the scene.

Born in Opobo-Kingdom of the King Jaja fame some 45 years ago, Peterside is a former Commissioner for Works in Rivers State and member representing Andoni/Opobo/Nkoro Federal Constituency in the House of Representatives where he has left his foot-prints in the sands of time as Chairman House Committee on Petroleum Resources [downstream sector]. Owing to his wealth of experience, he has also served as a member of other strategic committees, including anti-corruption, National Ethics and Values, Drugs, narcotics and financial crimes, cooperation and integration in Africa, Electoral Matters, Industry; Communications and works. His laudable achievements in public life, as those who have kept a close tab on his career would readily admit, is the outcome of conscious efforts to attain personal development for leadership. After grazing from the learning pastures of the prestigious Okrika Grammar School [OGS] in the 1980s, Dakuku proceeded to the Rivers State University of Science and Technology where he bagged a degree in Medical Laboratory Sciences. In a desperate search for knowledge, at a time his peers were fiercely engaged in the pursuit of material acquisitions, Dakuku went further to obtain a post-graduate Diploma in Business Administration. He?s today an alumnus of the Georgia State University [Atlanta] and the Harvard Kennedy School. A member of the Institute of Medical Laboratory Sciences, and the Nigerian Institute of Management, he is also a fellow of the Institute of Management Consultants of Nigeria. A globally-recognized expert in institutional reforms, the Amaopusenibo of Opobo Kingdom has been a regular resource person at international conferences around the world where he constantly shares his thoughts on leadership, corporate political strategy and business-government interactions.

Charity, as the saying goes, begins at home. Peterside is a man who has worked tirelessly as a youth to improve the lots of Rivers People, without necessarily playing to the gallery. At various times, quite early in life, he served as National President of the National Union of Rivers State Students, State Financial Secretary of the defunct Democratic Party of Nigeria, Special Assistant to former Governor Peter Odili on students and youths Affairs and chairman of Opobo/Nkoro local government area in 2005 when he was recognized as the best performing local government chairman.

Dakuku Peterside [Ph.D] makes no pretense about transforming Rivers State with a magic wand overnight. Unlike others, he counts on the support of Rivers People and his undying passion for sustainable development to improve the lots of the people. A seasoned management expert and globally acclaimed leadership trainer, this man who was instrumental to the success of Governor Rotimi Amaechi?s infrastructural revolution in Rivers State intends to take service delivery of new heights in the Nation?s ?Treasure Base?. In addition to infrastructure development, Peterside has articulated a workable plan on industrialization, youth empowerment and security. Above all, his highest selling point is his antecedent and avowed commitment to purposeful leadership and transparency in governance. For now, how he intends to achieve his dreams for Rivers State is obviously more important.

That Peterside is a credible alternative in a political setting soaked in tension emanating from the PDP politics of exclusion is evident in his political philosophy that drives home the point that Rivers People are ?Greater Together?. Having considered the where the people find themselves now and where they ought to be, the Igbani-born politician of distinction has thought it wise to devise a political strategy that seeks to mobilze the people for the common good of Rivers State, regardless of their ethnic, religious and political differences. To dwell further on his ?Greater Together? Political philosophy, it is a deliberate attempt to aggregate the social capital in Rivers State with a view to employing the benefits that flow from such a governmental arrangement, including trust, cooperation, information and reciprocity, to re-invent governance.

The planned alteration in the existing social order of a system imbued with conflict arising from an unhealthy competition over the control of political, social and economic capital has come at the nick of time. Clearly, what the government of Dr. Peterside intends to achieve is a more politically stable environment driven by increased awareness, greater participation, and the building of public trust in political leadership. To achieve its objectives, the political inclusion agenda of the APC governorship candidate in Rivers State also promises increased opportunities for all, particularly the most disadvantaged groups and communities.

Beyond mere platitudes, Dr. Peterside?s action-plan provides real solutions to the problems confronting Rivers People in recent times. On the political scene, he represents a paradigm shift in many aspects. To the admiration of his friends and close associates, Dakuku is not one to shut the door against a brother or neighbour on account of political differences. Little wonder he has spent his entire political career building bridges of unity and friendship across the length and breadth of Rivers State.

Without a shadow of doubt, the man who is now fondly called DAP [an acronym for Dakuku Adulphus Peterside] is the most technically equipped candidate gunning for the highest political position in the state, an office where making correct political decisions requires sound judgment. Unlike those without any record of achievements outside the realm of politics, the next governor of Rivers State is a man who, having developed his mind at the highest level in the academia, understands how to use political power for public good. It was perhaps owing to his unrelenting quest for good governance and the promotion of human rights that he established the Democratic and Leadership Initiative, a non-governmental organization which he ran successfully until his appointment as works commissioner in 2007.

?The chick that would become a cock?, as the African saying goes, can be spotted the very first day it was hatched?. This is a unique opportunity for all to identify with Dakuku Peterside, the new face of Rivers State.

BRI a great undertaking that benefits people of all participating countries