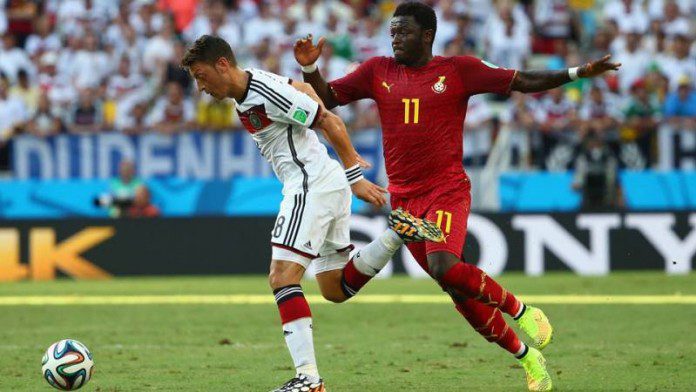 Sulley Muntari fighting German?s Mesut Ozil for the ball during the 2014 FIFA World Cup in Brazil

The Professionals Footballers Association of Ghana have declared their intentions to push for Al Ittihad Jeddah midfielder Sulley Muntari to be recalled by Ghana after a year suspension.

Muntari has been an international ban by the Ghana Football Association following a brawl with Black Stars Management Committee member Moses Armah during the 2014 FIFA World Cup in Brazil.

The former AC Milan and Inter Milan star was sacked from Ghana?s club along with the clubless Kevin-Prince Boateng for their bad conducts during Ghana?s campaign at the World Cup.

The Ghana Football Association have declared Muntari could be recalled if he officially apologises for his conduct in Brazil. Though the former Sunderland and Portsmouth midfielder has been silent on an apology, the secretary of the Professionals footballers representative body in Ghana, Tony Baffoe, has stated his outfit will push for Muntari?s recall if the 30-year-old midfielder issues a statement on his intentions to return.

?I always belong to the side of the players but there must be communication. Sulley Muntari has been quiet, so we should wait for him to come out with a statement. He has never come out with this issue, but if he comes out, we would know how to support, back or defend his interest,? he told Accra-based Kasapa FM.

Muntari has not featured for Ghana since playing against Germany in the 2014 World Cup finals but has showed up a number of times to offer support to the Black Stars during games.

Kevin-Prince Boateng, who was expelled along with Muntari, is widely seen to have ended his international career.