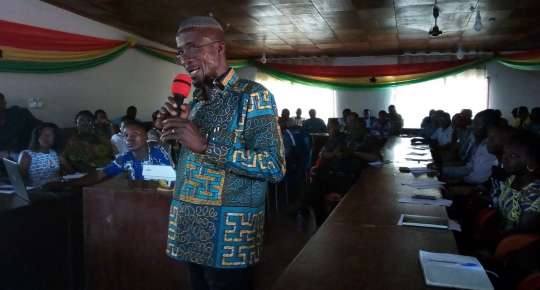 The Planting for Food and Jobs (PfFJs), one of the government’s flagship programmes is yielding positive results in the Jaman South Municipality of the Bono Region.

This is because it is boosting agricultural businesses and consequently achieving its intended purpose in the Municipality.

Alhaji Abuu, the Municipal Chief Executive (MCE) stated at a maiden “Meet the Press” programme held by the Assembly on Friday at Drobo in the Bono Region.

Besides other objectives the event created a platform for the MCE on behalf of the Assembly to account to the people, the government’s achievements regarding the implementation of socio-economic projects through its flagship programmes and policies in the Municipality.

Launched in early 2017, the PfFJs was designed to increase agricultural productivity to feed the nation and export the surplus, create employment and also to reduce the nation’s excess food import bill.

With the supply of farm inputs by the government to facilitate its sustainability, farmers’ enrollment on the PfFJs has been increasing annually in the Municipality since its inception, the MCE said.

Accordingly the corresponding amount of agricultural inputs such as maize and rice seeds as well as fertilizers inputs provided by the Ministry of Food and Agriculture were supplied to the farmers within the period under review.

He announced that the Chief and people of Faaman, a farming community near Drobo have allocated a vast stretch of land to the Assembly to facilitate the establishment of a cashew processing factory under the One District, One Factory policy implementation