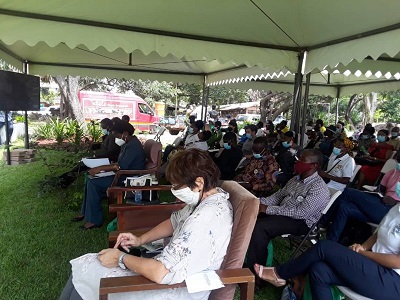 The Participatory Guarantee Systems (PGS) certification, a locally focused assurance system that certifies producers and processors of organic produce in Ghana, and ensures that such farmers subscribe to organic and agro-ecological principles has been launched in Accra.

The PGS label on any products, would thus, enable consumers to identify a truly organic products they purchase.
Mrs Olawami Benedict, the PGS Coordinator in Ghana, at the launch explained that the system represented the local verification system that assured consumers of organic produce on the local markets.

She said the PGS, was being implemented in the country under the Organic Markets for Development (OM4D) of the International Federation of Organic Agricultural Movement-Organics International (IFOAM) in partnership with Agro Eco-Louis Bolk Institute.

The launch of the product was, supported by the Market Oriented Agricultural Programme (MOAP) of the GIZ, and the Agro-Eco Louis Bolk Institute.

Mrs Benedict noted that the certification of organic produce under the PGS was based on the active participation of stakeholders and built on a foundation of trust, social networks and knowledge exchange, as such groups of PGS farmers by practice, agreed to adhere to a standard of production, which was transparent to all members within the community.

She said a number of producers had also been trained and certified as PGS organic producers nationwide, and as such, consumers could go ahead and look for PGS labels on their preferred organic products.

Dr Elke Stumpf, Head of Programme, GIZ-MOAP, said the promotion of organic production had been a focus area of the GIZ, because organic farming was a climate-smart agriculture that contributed to combatting climate change.

She said the MOAP, would support farmers and processors to be ready for the organic certification as that served as the gateway to access high-end markets.

She said consumer trends had shown that most Ghanaians preferred organic products if accessible with a trusted source, adding, that presented a huge potential for organic agriculture in Ghana.

“It is my strong hope that this launch here in Ghana will inspire you as a farmer, processor, marketer or consumer to be part of the organic movement in Ghana, whether you are planning your next farm venture or you are making your next buying decision in the shops”, she added.

Dr Solomon Gyan-Ansah, Deputy Director for Crops Services, Ministry of Food and Agriculture, said the PGS certification would go a long way to increase consumer confidence in patronising locally grown foods and plant products “to help us increase the income level of our farmers, create more jobs and further increase our national production performance and value at the global levels”.

He said the increase in health concerns and the changing of eating habits among citizens had created opportunities for the organic farmers in the country, especially, those into fruits and vegetables.

He said the government, under its “Investment for Food and Jobs 2018 to 2021 plan was, therefore, investing in the promotion and expansion of organic farming to enable producers to access the growing organic market, and that the investments were being made with support from development and strategic partner with the objective of fostering agricultural growth and development.