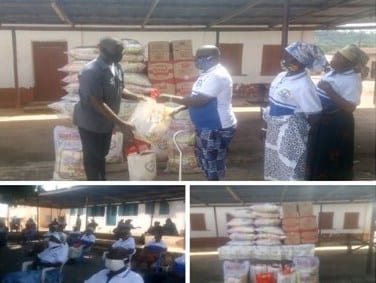 Mr Eric Ansong, popularly known as ‘Japan Burgar’, a philanthropist and a business man has donated food items worth Gh¢4,000.00 to the Aged Group, an association of elderly people in Aduamoa in the Eastern Region.

The donation, which formed part of his 51st birthday celebration, included bags of rice, canned fish and cooking oil.

At a brief ceremony to hand over the items to the leader of the group, Mr Michael Akrofi, who represented the philanthropist, said the donation formed part of Mr Anson’s way of giving back to society and impacting lives.

He said the philanthropist decided to support the aged because most of them felt abandoned by society.

Mr Akrofi explained that Mr Ansong started supporting the deprived in society about 20 years ago and initially concentrated on the Weija Leprosarium, but had now extended his philanthropic gesture to the aged who were equally in need of support.

Mr Akrofi therefore assured of Mr Anson’s continuous support to the needy in society in celebrating his birthday annually.

Receiving the items on behalf of the group, Opanyin Samuel Kwadwo Asiedu, the Leader of the Aged Group, applauded Mr Anson for the kind gesture and promised to distribute the items equally to ensure that every member of the group benefit from the donation.