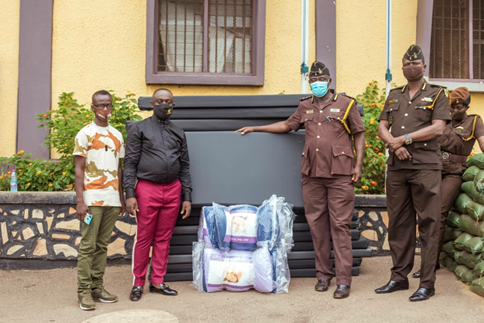 Mr Daniel Pitti, a Kumasi based philanthropist, has donated 20 mattresses and 20 pillows to the Kumasi Central Prisons for the welfare of inmates.

The donation follows a visit to the facility to pay for the release of four inmates who they could not pay their court fines.

He paid GHC 3,000.00 to secure the release of the four who were incarcerated for theft and smoking of Indian Hemp.

“I was here last November to pay for the release of four inmates and someone approached me and said the inmates were in dire need of mattresses and that I should consider donating mattresses next time,” he told the Ghana News Agency (GNA) after the presentation.

“I am here today in response to that call to donate these mattresses and pillows, however small, to support the inmates”, he explained.

He said it was important for well-meaning Ghanaians to contribute to the welfare of prisoners to ensure their reformation since they would eventually be integrated into society after serving their terms.

Some of them, he noted, were there not because they were criminals but were victims of circumstances, adding that, it could happen to anybody.

He said he would continue to support the prisoners in his small way as and when he had the resources.

Assistant Director of Prison (ADP) Tasembedd Ousmane, the Deputy Regional Commander of Prisons, who received the donation, acknowledged how such gestures impacted the lives of the inmates who lacked necessities.

He said most of the inmates lived on the benevolence of philanthropists and urged the public to contribute towards their upkeep.