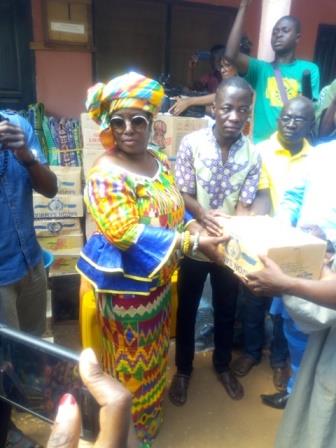 Togolese refugees in the Chereponi District Assembly (CDA) of the Northern Region have received gift items meant for their upkeep as part of efforts to lessen their plight. Madam Foussena Djagba, a Togolese and Patron of Diaspora Ghana, through whose personal initiative the items were secured, handed them over to the authorities of the CDA at Chereponi on Saturday for onward distribution to the refugees.

As at the end of last month, the CDA registered 612 Togolese refugees comprising children, women, and adult men, most of whom fled from Mango in Togo.

There are others who have also crossed from Mango in Togo to Chereponi but have not been officially registered and they have sought shelter with their extended families in the area.

The CDA has sheltered the refugees at two camps at Chereponi, and it has constituted a team to see to their welfare and security at the camps.

Togo, the French-speaking West African country, is currently facing socio-political challenges with some opposition forces demanding an end to the Eyadema dynasty, a situation which has led to unrest in the country forcing some citizens to flee to neighbouring countries.

Madam Djagba said she undertook the initiative on humanitarian grounds and expressed gratitude to authorities at CDA, and chiefs and people of the area for the warm reception accorded the refugees in the area.

She said “I am overwhelmed because the condition of my people at Chereponi shows that they are receiving good care from the authorities.”

She expressed optimism that the socio-political challenges confronting Togo would soon be resolved for all to return home to undertake their normal businesses.

Mr Kofi Ben Ngisah, Presiding Member of CDA, who represented the District Chief Executive of Chereponi in receiving the items, said the CDA was doing all it could by providing food amongst other support forms to the refugees to ensure their welfare.

Mr Ngisah was hopeful that representative of the United Nations Development Programme, who recently visited the refugees and took their particulars, would return to offer some support to them.

He commended Madam Djagba for the support saying it had come as a relief to the refugees and the CDA, who was finding it tough to continue to cater for the refugees.

Mr Nambiema Alarou, one of the Togolese refugees at Chereponi, who was a welder at Mango in Togo, called for urgent resolution of the challenges in Togo to enable the refugees to return home.
GNA/newsghana.com.gh