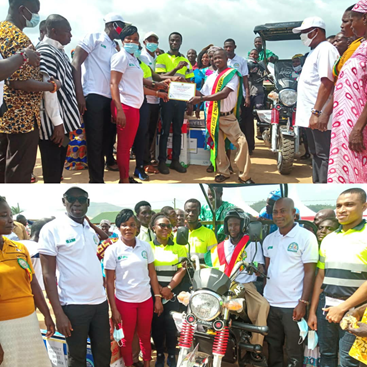 A 41-year-old physically challenged farmer, has been adjudged the 2020 best district farmer for the Obuasi East at this year’s National Farmers’ Day awards ceremony held at Asonkore in the Ashanti Region.

Mr. Kwabena Anokye, who is from Mampamhwe has engaged in farming for the past 25 years, producing crops and livestock.

He had previously won awards like Best Maize Farmer and Best PWD Cocoa Farmer in 2016 and 2017 Farmers’ Day awards respectively.

For his prize, Mr. Anokye took home a tricycle, 32inches LED Television, a knapsack spraying machine, cutlasses, a piece of cloth and a certificate of merit, all sponsored by AngloGold Ashanti Obuasi Mine.

The award winner, who could not hide his excitement, thanked the Agriculture Department for the good relationship with farmers in the District and commended the Organizers of the program for the tremendous work.

He appealed to all persons with disability to take advantage of the government’s plethora of social intervention measures to boost agriculture in the country and venture into farming since it was lucrative.

“Disability is not inability,” Mr. Anokye told the cheering gathering at the ceremony.

Mr. Patrick Boakye-Yiadom, Member of Parliament for Obuasi East, pointed out that the abundance of food items on the market during the covid-19 lockdown period was as a result of good agricultural policies such as the planting for food and jobs introduced by the government.

He said the government had taken bold steps towards positioning agriculture as the engine of growth for the Ghanaian economy by introducing policies such as the planting for Food and Jobs, Planting for Export and Rural Development (PERD), free distribution of day old chicks to poultry farmers, 28 per cent increase in cocoa prices and distribution of oil palm seedlings to farmers.

Mr. Boakye-Yiadom said all these policies were in the right direction to support and make agriculture very attractive.

He commended all farmers for their contribution in developing the country.

Mrs. Faustina Amissah, District Chief Executive (DCE), commended the gallant farmers and fishermen in the District for working tirelessly day and night to produce for both industrial and human consumption.

Touching on this year’s theme for the celebration, “Ensuring Agribusiness Development under Covid-19, Opportunities and Challenges”, Mrs. Amissah said the theme was carefully chosen to reflect the covid-19 pandemic situation and its tremendous impact on agribusiness.

She mentioned lack of input supply which had brought significant adverse effect on production of agriculture products, lack of labour to work in the farms and again, a decreased capacity of financial institutions to provide support to agribusiness, as some of the challenges posed by covid-19 on agricultural production in the country.

Mrs. Amissah, however, said the covid-19 had also brought in some opportunities for the country.

This included increased supply and consumption of local foods and indigenous agricultural products which had resulted in self-sufficiency of the country’s supply chain, eating of more fruits and vegetables which were helping to boost the immune system of the people as well as higher incomes for farmers.

The DCE said a total of 2,355 farmers in the Obuasi East District benefitted from the free distribution of 25,696 oil palm seedlings and fertilizers.

She stressed the need for the people to conduct themselves well to ensure peace in the District before, during and after the elections.

Mr. Victor Owusu-Ansah, District Director of Food and Agriculture, said the outbreak of covid-19 had created a new sense of awareness about building a strong agricultural system that ensured resilience and food security in the country.

He said farmers in the District had been educated on the value chain concept to help link the various actors made up of producers, processors, marketers and input dealers.

Mr. Owusu-Ansah encouraged farmers who were honored to work hard to contest for regional and national awards in future.

In all, 20 farmers in the District were awarded by the Assembly.