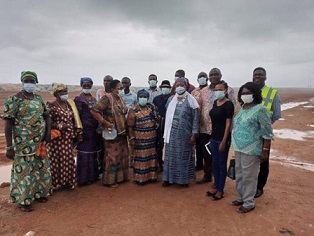 Some members of the Public Interest and Accountability Committee (PIAC) on Project Monitoring have expressed unhappiness with what they described as “waste” of oil revenues on the construction of a durbar ground for the people of New Takoradi in the Western Region.

The project, completed in 2020 is in a very deplorable state and does not fit for the intended purpose as it lacked lots of amenities to make it a standard durbar ground for all kinds of events.

The 184,013.41cedis contributed from the Annual Budget Fund Allocation towards the construction of the project, is already coming to nought as the place is flood prone.

This came to light during a tour of some projects funded by Oil monies within the Western Region by the members of PIAC.

The monitoring according to Mr. Eric Defor, Chair of the Public Affairs and Communication Subcommittee, was to find out the contribution of the oil monies to projects execution in the various Regions.

He said creating lasting impact from the time bound resources was timely to avert such regrets…”this project cannot stand the test of time…in ten years, we may be sorry for wasting money if nothing is done about it now”.

Mr. James Mensah, a resident bemoaned the poor construction and blamed the authorities for the lack of due diligence on the execution of the project.

“This is a dumping area, with lots of plastic waste, so my layman’s knowledge tells me something is not right,” he added.

Mr. Mark Agyeman, the Technical Manager of PIAC attributed the defects on the project to the lack of proper soil integration.

Nana Akosua Gyamfuaba, the Acting Paramount Queen Mother of Shama was unhappy that contractors on such projects were always imported to defeat the local content and the decentralization concept.

“Why do we bring contractors from Accra who do less or no engagement with even the assemblies on execution of such projects…they do anything and get away with it”.

The Queenmother therefore reminded authorities on the need for proper engagement with stakeholders, project beneficiaries so as to totally do away with such problems.

At Ahenikofikrom, the PIAC team inspected a one-unit KG block worth
81,507.60 cedis from the oil fund which was disbursed in 2018.

The KG project though completed did not make provision for sanitary facilities, that would serve the nature’s call needs of the toddlers and infants who are the main beneficiaries.

Such children would have to “poopoo” or “wee-wee” in chamber pots and poly bags to be dumped by teachers afterwards.

Hajia Dr. Azara Bukari Kansawurche, Queen Mother of the Bole traditional area and Representative on PIAC, intimated the need for the Assembly to take up the matter and provide for the children as a matter of urgency.

Mr. Solomon Ampofo, the Natural Resources Coordinator of the Friends of the Nation (FoN) who played host to the PIAC team, prayed that lessons learnt from realities on the ground would be carefully absorbed by state actors to improve upon the lives of Ghanaians.