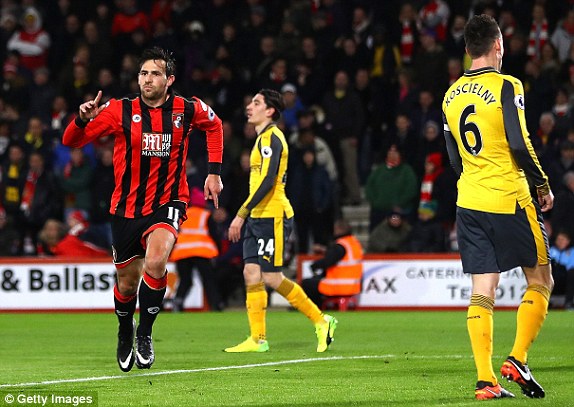 Olivier Giroud assisted two goals and scored an injury-time equaliser as Arsenal came from 3-0 down to draw 3-3 at AFC Bournemouth.

Arsene Wenger’s side, again without Mesut Ozil, were given an early shock when the home side netted twice in four first-half minutes.

Left-back Charlie Daniels was in acres of space on 16 minutes when he was able to receive the ball before coming inside, beating Hector Bellerin and sending the ball past Petr Cech.

The Vitality crowd were on their feet again on 20 minutes when Granit Xhaka fouled Callum Wilson in the box. The 24-year-old forward, linked with a move to Newcastle in recent days, stepped up to coolly dispatch.

Wilson had a strike disallowed for handball early in the second half before Ryan Fraser soon added a third. The lively attacker shoved Bellerin on the edge of the box, taking the ball inside and sending it through the legs of Cech.

The visitors were given hope on 70 minutes when Alexis Sanchez pulled one back, heading home his 13th league goal of the season. Summer signing Lucas Perez grabbed a second on 75 minutes with a well-taken volley from an acute angle.

The 44-year-old left his role as Bayern Munich assistant to replace Bob Bradley at the Liberty Stadium on a two-and-a-half year deal and he watched from the stands in the first half as Alan Curtis took charge. The former Derby boss then appeared on the touchline for the second period.

Summer signing Alfie Mawson had headed the visitors into the lead shortly before the interval. Wilfried Zaha, playing his final match before heading off to the Africa Cup of Nations with Ivory Coast, sent a brilliant volley past Lukasz Fabianski on 83 minutes as the match looked to be heading for a draw.

The Spanish full-back then stole the three points two minutes from time, lifting Swansea off the bottom of the table and just a point behind Palace in 17th.