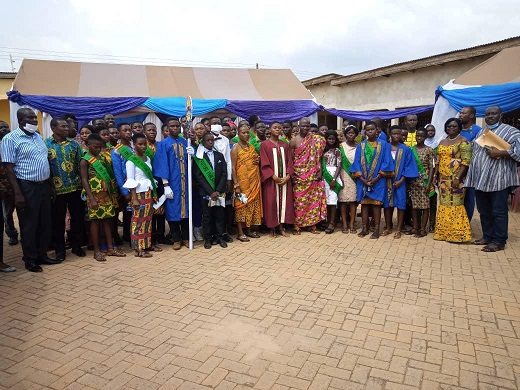 Plan International-Ghana (Int-GH) had called for urgent action by the Government and Policymakers to stop the abuse and harassment of girls and young women who go online.

Mr. Richard Buadu, Manager of Plan Int-Gh, Central Programme Unit, made the call at a Children and Youth Mock Parliament held at Essarkyir in the Ekumfi District of the Central Region.

The program under the theme “Free for Girls to go online”, was graced by Heads of Departments and Institutions, Traditional Rulers, Assembly Members, and several school children in the District.

It was to give girls the platform to voice out their ordeals and grievances for prompt action.

Plan Int-Gh is an international humanitarian child-centered community development non-governmental organization (NGO), without religious and political affiliations with child sponsorship as the basic foundation of the organization.

Its purpose statement is to strive for a just world that advance children’s right and equality for girls.

Mr. Buadu announced that since the adoption of the resolution for observing the International Day of the Girl Child in 2012, Plan International had embarked on researches to find out the status of girls and young women in the world.

“This year our focus was on “free to be online” which tried to explore the abuses and harassment girls and young women go through in their attempt to use the social media”, he added.

As part of the research the organization interacted with 14,000 girls in 22 communities globally during its research which revealed that half of the number have been harassed or abused on social media.

Some of the key research findings included abuse and harassment which discouraged girls to participate in virtual programs due to online violence.

It found out that five representing 19 percent of girls have left or significantly reduced the use of social media platforms after being harassed, while one in ten representing 12 percent of them have changed the way they way expressed themselves online.

“Some of us are physically threatened, body shamed, racially abused and it gets worse when we raise our voices and share our opinions”, the girls indicated.

They had therefore written an open letter to Facebook, Instagram, Tik Tok, and Twitter, the world’s most influential social media platforms, calling on them to create ways to report abuse and harassment that will work for them, he noted.

“Let us all join hands together to sign the open letter by the girls and young women to the social media providers to put in place drastic mechanism to effectively regulate their platforms and to check their harassment and abuse, Mr Buadu appealed.

Earlier Mrs Mabel Judith Micah, Effutu Municipal Director of Ghana Education Service, stated that the rights of girls and young women have been trampled for many years.

The institution of the Children’s Parliament programme by Plan International, she indicated, was, therefore, an action in the right direction for society to know their challenges and address them accordingly.