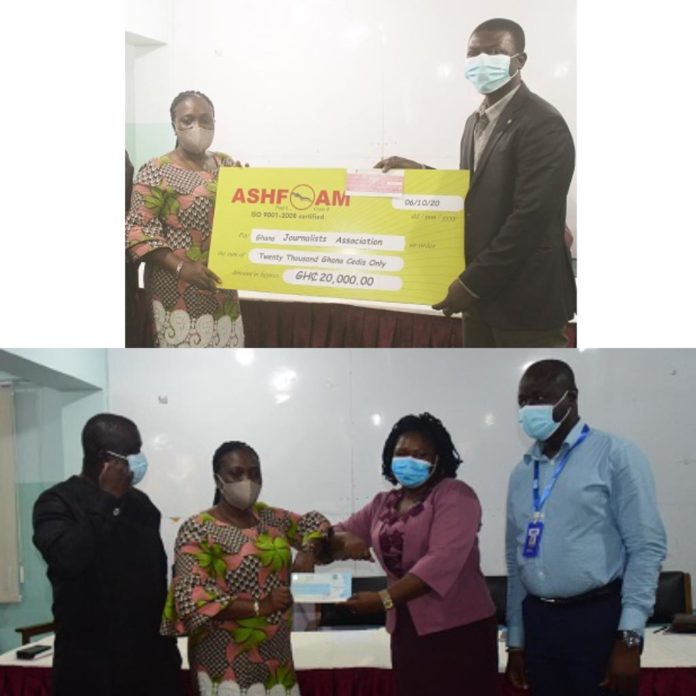 To encourage the employment of high ethical standards in the journalism profession and national development, Plan International Ghana and the Ashanti Foam Factory Limited (ASHFOAM) have donated to the Ghana Journalists Association (GJA).

The two entities presented a cheque for GH¢20,000.00 each to the Association to ensure the successful organisation of the 25th GJA Awards, which is slated for October 24, 2020.

Mrs Vera Abbey, the Acting Head of Programmes of Plan International Ghana, a child-welfare promotion non-governmental organisation, said the media fraternity played a pivotal role in the lives of all especially the vulnerable, including women and children in the country, hence, her organisation was pleased to contribute to the successful celebration of its silver jubilee.

She explained that as Plan International Ghana was mandated to promote children’s rights, welfare and equality, it was going to sponsor the “Child Protection Category Award,” to boost the hard work of journalists who were concerned with child welfare issues.

“Although we have had some associations with the GJA, we want to use this year’s presentation and support, to mark the beginning of stronger collaboration with the highest expectation that we will have other engagements beyond this,” she added.

Nana Yaw Ampem-Darko Antwi, the Marketing and Communications Manager of ASHFOAM, said his company aside the financial support, would also present some items to the awardees and ensure that the office structure of the Association was painted prior to the celebration.

He said the Centre would be used as the collation centre of results to the media houses (both national and international), “it has to be given a facelift”, he added.

The journalist of the year, he said, would be given an ‘L-shaped’ couch and a ‘queen-sized’ mattress, while the best promising female journalist and the best journalist in agriculture would receive a mattress each.

Mr Antwi explained that the company had a policy underway, which offered all journalists nationwide 15 per cent discount on products purchased from the company.

Mrs Linda Asante-Agyei, the Vice President of the GJA, commended the companies for their unflinching support, saying it would go a long way to encourage journalists to give out their best to the development of the entire country and beyond.

“Despite the impact of the COVID-19 on the little resources that you have, you have still managed to support us and we are so grateful because it tells the bond established between us,” she added.