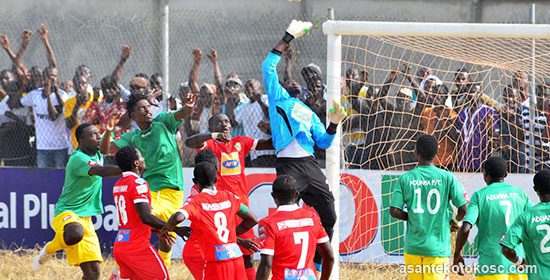 Aduana Stars Football Club on Thursday said the week 18 match fixture between the club and Kumasi Asante Kotoko at Dormaa-Ahenkro was not on the schedule of live matches to be telecasted by StarTimes.

StarTimes owns the media rights and also the official sponsor of the Ghana Premier League.

This was contained in a statement issued by the club and signed by the Head of Communication for Aduana Stars, Mr Dennis Asamoah and copied to the Ghana News Agency (GNA) sports at Dormaa-Ahenkro.

It said “our match was not originally part of the schedule of matches to be aired. But we were alerted by the Premier League Board (PLB) on Wednesday June 7, at about 17:45 hours with the excuse that the GBC OB Vans will be in Kumasi for the Black Stars game against Ethiopia”, it said.

The statement said “for proximity sake, they decided to continue to Dormaa-Ahenkro to telecast our game with Kotoko.”

It admitted that the actions of fans stopping the StarTimes crew and their partners GBC from beaming the match live from the Nana Agyemang Badu I Stadium in Dormaa-Ahenkro on Monday, was condemnable.

“But we want to place on record that the Premier League Board was pleading with us to allow the match to be aired and not because it must be aired, which we did not kowtow to”, the statement said.

It said the “club which was supposed to have its matches aired on Saturday per the schedule pulled out because they have had more of their matches on television, hence Aduana Stars must be allowed to benefit from the chance, which we deem unfair and unprofessional”.

“You don’t choose Aduana Stars because a club asserted that more of their matches had been beamed live television”.

The statement said it was now clear the PLB chose Aduana because their location will be convenient for the broadcasters and also a club had prevented their match to be aired.

It added that the PLB was unfair to Aduana, as they could not reach a compromise with the club before directing the television crew to travel to Dormaa-Ahenkro for the match.

The statement appealed to all football loving fans to discard as wrong, the perception that the game was scheduled to be screened on television.