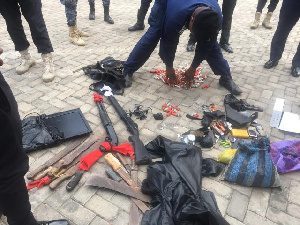 The Central Regional Police Command has arrested five people for allegedly manufacturing local weapons in a special operation at Assin Brofoyedur in the Assin Municipality of the region.

Commissioner of Police (COP) Paul Manly Awini, the Regional Commander of the Ghana Police Service, said the Police acted on intelligence that someone was producing locally manufactured weapons and supplying them to criminals in the area.

He said the Command embarked on a special operation in the early hours of Friday at Assin Brofyedur and made five arrests at three separate locations.

They include two blacksmiths Pele Aziaku, 54, and Washington Pobi, 40, and three minors whose ages ranged between 16 and 17 years.

COP Awini said the special operation forms part of efforts by the Police to clamp down on criminal activities in the region as the Christmas and New Year approaches.

Speaking on the robbery incident that occurred on the Accra-Cape Coast high way near Potsin on Thursday evening, the Region Commander said, the Police is working to track down the suspects and bring them to book.

He said the Police received a distress call at about 1830 hours on Thursday that some suspected armed robbers have blocked the main Accra-Cape Coast road near Gomoa Potsin and dispatched patrol teams but the robbers fled the scene before they arrived.

He told the media that investigations revealed that six vehicles were attacked and occupants robbed by the robbers- injuring two in the process.

ACOP Awini said the Police is working hard to provide a secured the environment and urged the public to continue to cooperate with the Police and provide information on any suspected criminal activity.